Fig. 1: By passing flue gases through several heat exchangers, the efficiency of generating domestic hot water is maximised.
Domestic hot water stored at 60°C or more and condensing water heaters (where the return temperature has to be below about 55°C) might seem a paradox. So how can condensing water heaters be included in the Government’s Energy Technology List. PAUL MARSDON explains.Independent gas-fired condensing water heaters have recently been included in a distinct sub-heading under boilers in the Government’s Energy Technology List, in recognition of their energy saving capabilities. In principle, this makes sense, given that the demand for domestic hot water is not seasonal and, generally, is increasing in modern commercial buildings, whilst the reverse is generally true for space heating. However, in practice, can a water heater provide the efficiencies of condensing operation at the lower return temperatures necessary yet supply hot water at the elevated temperatures required for its use and to prevent formation of bacteria such as legionella? Contradiction Despite this apparent paradox, there is no contradiction in terms when referring to a ‘high-efficiency condensing independent gas-fired water heater’. So how does this type of appliance produce hot water at an acceptable temperature and operate in condensing mode? This can happen in different ways, according to the technology adopted by the manufacturer and is also influenced by the type of water heater — for instance whether it is a non-storage or storage unit. Domestic-hot-water services for commercial and public buildings need to be supplied at a safe set temperature limit somewhere above 60°C. To comply with regulations for preventing legionella, stored hot water should not fall below this temperature, and the system return temperature should not fall below 54ºC. 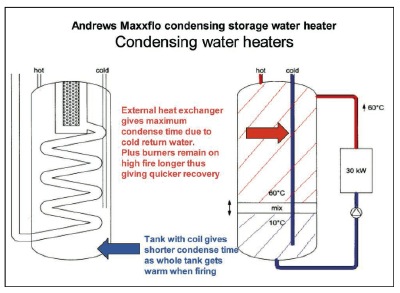 Fig. 2:The efficiency of condensing water heaters is enhanced using designs that minimise the temperature of the return water and maximise the condensing time.

Fig. 2:The efficiency of condensing water heaters is enhanced using designs that minimise the temperature of the return water and maximise the condensing time.

The concept used by Andrews for delivering high efficiency ratings from its most recently introduced condensing storage water heater range (Fig. 2) is based on the stainless-steel tank being heated by one or more externally mounted burner modules, each containing a pre-mix burner within a stainless-steel heat exchanger (Fig. 3). It operates according to the loading principle, with the water in the bottom of the tank being fed directly through the heat exchanger, heated up and carried back to the top of the tank. 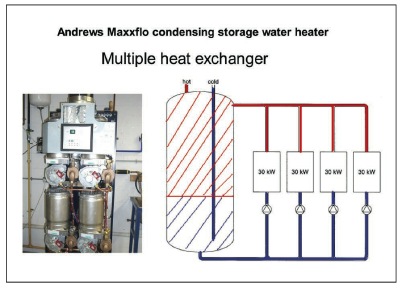 Fig. 2:Fig. 3:The reality of high-efficiency condensing water heating — external burner modules heat cold water drawn from the bottom of the storage tank and deliver it to the top.

Mains cold water enters into the bottom of the storage tank via a dip tube. When draw-off occurs, water enters the external heat exchanger/s via a tapping at the base of the tank. Because this water is supplied at around 10ºC (typical design supply temperature and well below the 55ºC required for condensing to occur) the water heater will operate in condensing mode whilst it raises the temperature of the stored water (typically 200 to 300 litres) to the 60°C set point. During the final heating period, which takes no more than a few minutes and occurs when about 80% of the contents of the tank is at the set point of 60°C, water supplying the heat exchanger/s increases in temperature from its typical 10°C up to the 60°C tank set point. It is at this stage that the heat exchanger/s start to modulate down and stop condensing as they go to standby mode. Because the water is being circulated from the lowest point in the tank, the whole tank is heated up, and there are no cool zones. This system therefore prevents conditions occurring that would harbour legionella bacterium. Moreover, the storage-tank temperature of this appliance can be re-set by means of a remote time clock to allow operation of an anti-legionella flushing programme throughout the hot water distribution pipework. Paul Marsden is with Andrews Water Heaters, Wednesbury One, Black Country New Road, Wednesbury, West Midlands WS10 7NZ.