Approaching 20 years of VRF in the UK Existing boiler plant and heat-rejection dry cooler at roof level serve these water-cooled VRV units in Carolyn House in Croydon. They are part of the refurbishment of three floors with heat-recovery air-conditioning.
The strength of VRV/VRF air conditioning in the UK has grown as the capability of these systems has evolved. MARK DYER examines this ever-growing market.VRV (variable-refrigerant-volume) air conditioning was pioneered by Daikin Industries in Japan and introduced to the UK by Daikin Europe in 1987. Already widely known in Japan for some five years, the VRV system nevertheless revolutionised UK air-conditioning thinking and rapidly achieved a strong position in the industry — despite its initially relatively simple concept with just four cooling-only indoor fan-coil units operated off a single outdoor condensing unit. Since then, Daikin has developed VRV’s operational scope and performance out of all recognition to its original format, and several other manufacturers have introduced their own VRF (variable-refrigerant-flow) systems into the market. [VRV is a Daikin trademark, and VRF is the generic term — Ed.] Inverter control The first great leap forward in system development came in 1990 when Daikin incorporated inverter control into its heat pump VRV and doubled its number of supported indoor units to eight. Inverter capacity control increased system flexibility and efficiency at a stroke by enabling condensing-unit output to be modulated in response to the cooling or heating demand of the conditioned space. 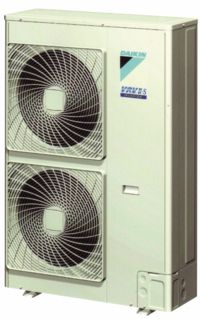 Bringing the benefits of VRV air conditioning to smaller projects with only a single-phase electricity supply is the ‘mini’ VRVII-S.

A further development came in 1991 with the introduction of heat-recovery, extended the following year by fresh-air supply and computerised system management. By 1994, VRV was operating 16 indoor units from one outdoor unit. Around 1998, the refrigerant issue burst upon the UK market, causing air-conditioning manufacturers, Daikin Europe among them, to consider the need to phase out HCFC R22 and replace it with a suitable alternative. Refrigerants After a great deal of research and component redesign, Daikin introduced its fully R407C optimised system in 1999, supporting 16 indoor units VRV in 1999, increased a year later to 32 indoor units. A heat-recovery model came the following year. Perceived by Daikin solely as an interim solution to the refrigerant problem, the R407C VRV nevertheless, represented a valuable medium-term step in the eventual move away from HCFCs. Commercial air-conditioning technology advanced yet again in 2003 with the introduction of VRVII — the first system of this type using HFC R410A. Available in both heat-pump and heat-recovery formats and with many new features, VRVII represented a considerable advance over earlier systems. The use of a purpose-built inverter-controlled scroll compressor for example, raised COPs to new heights, whilst its DC motor promoted high efficiency, particularly in the most frequently used low to mid settings, reducing electricity consumption and costs. Both formats support up to 40 indoor units. At that point, the market could have been forgiven for thinking that the development of VRV/VRF was nearing the end of its envelope, but 2004 saw the launch of the Daikin ‘mini’ VRVII-S. Operating on single-phase electricity supply and available in 4, 5 and 6 HP capacities, the system quickly became a firm favourite for smaller commercial and large residential apartment projects. Water cooled Until 2000, all VRV/VRF systems had been air-cooled, but the introduction of water-cooled versions extended the application potential. Ideally suited to both new and existing high-rise commercial buildings or projects lacking roof or external space for outdoor units — or where stringent noise regulations apply — the layout of a water-cooled system allows operation independent of ambient conditions. A plate heat exchanger in the condensing unit is supplied with water at between 10 to 45°C from a cooling tower/dry cooler or LPHW boiler. Since water (from an existing wet system, borehole, lake or river) is the heat-transfer medium, there are no limits on piping length. Liquid/gas refrigerant lines link the condensing unit(s) with the indoor units. Since the water piping does not intrude into the conditioned space, there are no leakage problems. During the heating cycle, heat is absorbed from the water circuit and transmitted via the heat exchanger to the indoor fan-coil units. Conversely, during cooling, heat is rejected to the water circuit and exhausted to atmosphere by a dry cooler. Heat recovery is achieved by utilising heat absorbed from the water circuit for indoor units in heating mode and rejecting heat to the water circuit from indoor units in cooling mode. Even the advent of water-cooled systems however, does not bring the story up to date. At the end of last year, Daikin introduced its third-generation VRV. At present available in heat-pump and cooling-only variants, the system incorporates brings a number of innovative design, installation and maintenance refinements. System capacity is 12.5% greater than VRVII at 5 to 54 HP (cooling only 5 to 18 HP), and 64 indoor units can be connected to a single heat-pump outdoor unit — 12 more than before. Total system piping length is increased from 300 to 1000 m, and greater unit combination flexibility allows any sized unit (except the 5 HP model) to be connected with any other sized unit. Improved unit diversity also enables, for example, a 10 HP outdoor unit to be connected with 25 indoor units, compared with 16 indoor units to a 10HP VRVII). 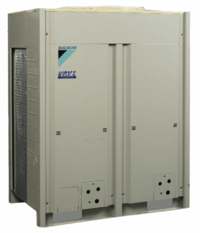 The first VRF/VRV product range to use R410A was Daikin’s VRVII, available in both heat-pump and heat-recovery formats.

Perhaps the most interesting and environmentally conscious innovation however, is VRVIII’s ability to control and contain the amount of refrigerant charge applied during commissioning. Operating a button on the condensing unit after a refrigerant cylinder is connected to the charging port initiates charging, which ceases automatically as soon as the appropriate volume of refrigerant has been delivered. Refrigerant containment is further enhanced by using brazed joints instead of flared and flanged connections on the refrigerant circuit. Control The development of VRV and VRF air conditioning over the years has naturally gone hand in hand with parallel improvements in control systems. VRV for example, is supported by a complete suite of advanced air-conditioning monitoring and control systems that ensure the provision of high energy saving, precisely controlled and monitored air conditioning solutions for all relevant building projects. Such control packages provide the sophisticated system regulation and also provide owners, landlords and tenants with valuable data on fuel consumption as well as a wide range of system and unit operating parameters. Mark Dyer is marketing manager with Daikin Airconditioning UK Ltd, The Heights, Brooklands, Weybridge, Surrey KT13 0NY.