The age of computers — and continuing challenges (Towards the centenary, 1980 to 2004)

On the technical front, building services has changed more in the last 25 years than in the previous 75 years. Commerical and economic problems ,however, remain stubbornly persistent.At the beginning of 1980, there would scarcely have been a computer to be seen in the offices of most building-services companies. 25 years later, 100 years since the roots of the Heating & Ventilating Contractors’ Association, computers are ubiquitous. The growth of computer-aided design has changed almost every aspect of the business, including design, estimating, planning, cost control and communications. Micro-chip technology has also transformed the control and management of building-services systems, having progressed from centralised computer control to intelligent outstations that can ‘think’ for themselves and be linked together. More recent innovations enable the Internet to provide major opportunities for the sharing and transmission of information and the remote control of services in buildings. Energy efficiency Services design became more specialised, with emphasis on energy efficiency and consumption — a longer term consequence of the energy crisis of the early 1970s. Planned preventive maintenance and cost-in-use became issues. Expertise was moved off site and into the factory as the benefits of prefabrication were realised. Further steps towards better-serviced buildings came with the recognition fo the need for specialist commissioning teams and professional facilities managers. Major challenges to the growing air-conditioning market were posed by the outbreak of Legionnaires’ Disease at Stafford District General Hospital in the Spring of 1985 and the discovery in the 1970s and 1980s that CFCs such as R11 and R12 were responsible for destroying the ozone layer over the Antarctic. The Stafford outbreak of Legionnaires’ Disease was the worst in the world, with 37 deaths. It was associated with legionella bacteria in cooling towers. Concerns over the depletion of the depletion of the ozone layer led to international co-operation on a huge scale, culminating in the signing of the Montreal Protocol in 1987, which became effective in 1989. On the economic front, the last 25 years were as challenging as any of the three previous quarter centuries. The challenging economic situation of the 1960s and 1970s continued into the 1980s and well into the 1990s. Construction output continued to decline, and competition was intense. In 1983, the suicidal level of tender prices led to record levels of bankruptcies among HVCA members The poor economic situation led to skill shortages as reduced apprentice intake started to have an effect. Contractual environment The contractual environment became more aggressive, with penalty clauses and guarantees in contracts becoming more frequent. Public-spending restrictions and the need for rebuilding in some inner cities prompted partnerships between the public and private sectors. They proved to be the beginning of the Private Public Partnership (PPP), and larger HVCA members became heavily involved in projects financed through Private Finance Initiatives. 2003: Thirty St Mary Axe, London (mechanical services installed by Skanska Rashleigh Weatherfoil for Swiss Re). Photograph: Nigel Young
The was considerable scope and much need for HVCA to address these commercial issues. On the training front, the association negotiated the sector’s withdrawal from the scope of the Construction Industry Training Board in 1990. From that move emerged the formation of Building Engineering Services Training (BEST) as a managing agency for training and the establishment of Engineering Services Training Trust Ltd (ESTTL), which became a recognised industry training organisation in 1997 and a national training organisation in 1997. ESTTL’s responsibility were assumed in 2003 by SummitSkills, the new sector skills council for building-services engineering. Latham and Egan With many aspects of procurement and practices in the construction industry being unsatisfactory, HVCA (initially through the Confederation of Associations of Specialist Engineering Contractors and later as part of the Specialist Engineering Contractors’ Group) played a key role in persuading Government to undertake a review of procurement and practices in the construction industry. That work culminated in the publication of Sir Michael Latham’s landmark report ‘Constructing the team’ in 1994. SEC Group subsequently launched a successful campaign promoting the need for legislation underpinning some of the report’s recommendations — notably payment and the resolution of disputes. ‘The housing grants construction and regeneration act’ passed into law in 1996 and came into full effect in 1998. The significance of this legislation aimed at improving payment and the resolution of disputes, particularly for specialist sub-contractors, could not be over-estimated. Major achievements were the outlawing of pay-when-paid clauses, a statutory right of suspension for non-payment and cost-effective adjudication. The task of building on the Latham report was entrusted to Sir John Egan. He produced two reports — ‘Rethinking construction’ in 1998 and ‘Accelerating change’ in 2002. These set out the need for a partnership approach and the integration of teams and supply chains, including a leadership role for clients. Raising standards Throughout its 100-year history, HVCA and its predecessors have helped members position themselves in the market by raising standards, promoting excellence and assuring competence. Perhaps the greatest such contribution ever made was the introduction in 2003 of independent third-party inspection and assessment for membership of HVCA. This initiative was closely linked to the establishment of its SKILLcard scheme, verifying the skill level of operatives and the competence in site health and safety. 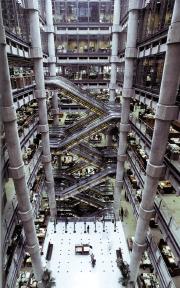 Can the Lloyds of London Building already be 20 years old! Services for this controversial building, with its external ductwork, were installed by Haden Young.

As HVCA entered its centenary year with a membership of 1345 companies, many of the problems that led to the formation in 1904 of an organisation to represent the special interests of contractors still remain. Tendering practices and payment problems were issues in 1904 — and remain so today, adversely affecting relationships, profitability and, therefore, development in the sector. The need for and role of an association addressing the special problems of contractors are, perhaps, greater today than in 1904.