Can it really be as late as the 1960s before legislation for minimum standards of heating in offices, shops and factories was passed? How much longer might we have to wait for legislation on excessively high indoor temperatures?Projects containing a large element of engineering services were the principal focus of the post-war building programme. They included hospitals, laboratories, universities, hotels, shopping centres, places of entertainment and various types of high-rise buildings. A further boost to the industry was provided by legislation passed in the 1960s for minimum standards of heating in offices, shops and factories. Air conditioning Comfort air conditioning began to be used on a wide scale in the UK. It was most widely used in high-rise offices, which were often in city centres subject to high levels of traffic noise and pollution, so that opening windows to provide ventilation was impractical. High-velocity all-air systems such as dual-duct gave way to water–air induction systems. Variable-air-volume (VAV) air conditioning had become widely used by the end of the 1960s. During the same period, centralised control and monitoring systems were coming into use, and many HVCA members enlarged their services into fire protection, instrumentation and maintenance. It was in the 1950s that small-bore domestic heating systems using gas or oil replaced gravity-circulation systems and coal-fire boilers. With fewer than 5% of homes having central heating, the domestic central heating market was poised to grow, but the building-services industry had failed to exploit the pent-up demand because it did not have the marketing resources. That marketing shortfall was met by competing fuel interests. Unfortunately, demand was stimulated beyond the capacity of competent installers, and the ‘cowboys’ moved in — often lacking experience, skill and financial integrity. The first international exhibition for the heating and ventilating industry was held in 1961 at Olympia in London. Renamed HVCA This period of 25 years was also a time of significant development for the association. In 1963, the Association of Heating, Ventilating & Domestic Engineering Employers changed its name to the Heating & Ventilating Contractors’ Association (HVCA) and moved to new offices above Victoria Coach Station. The period also saw the formation of more specialist interest groups, following the setting up of the Ductwork Group in 1945. The Home Heating Group was founded in 1964, with nearly 200 members at its inception. It later became the Heating & Plumbing Services Group, and its main objective was to establish good practice in the domestic sector, including publishing guides to good practice, specifications and introducing the Double Guarantee Scheme. London’s Millbank Tower under construction in 1962. Air conditioning was installed by Ellis Mechanical.
The National Contractors’ Group was formed in 1971 to provide an intelligence service between larger members and the HVCA Council. Its wide-ranging interests include employment affairs, national wage agreements (including the Major Projects Agreement) and lobbying Government. The Unit Air Conditioning Group was set up in 1971 to handle this fast-growing specialist market. In 1971, members of the National Association of Refrigeration & Air Conditioning Contractors joined with the group to form the Refrigeration & Unit Air Conditioning Group. It produced the only unit-air-conditioning specification in Britain and also developed educational programmes and initiatives to ensure a skilled workforce to satisfy the future expansion of the market. The Services & Maintenance Group (later renamed the Services & Facilities Group) was formed in 1983 to serve the fastest growing sector in building services. One of its major achievements was the development of the SMG 90 standard maintenance specification for building services. It was revised and relaunched in CD format as SMG 2000. The major achievement of the Ductwork Group during this period was the specification for sheet-metal ductwork DW/144, published in 1963. This is one of a range of specifications for the manufacture and installation of ductwork, which have achieved international recognition and the only recognised specifications for the UK. HVCA moved to its current headquarters at ESCA House in London in 1976, which it shares with the Electrical Contractors’ Association. Inflation The 1960s and 1970s were turbulent times for the building-services industry — and the nation. Inflation peaked at just under 30%, and average profit margins in the industry were less than 3% — effectively a loss at these rates of inflation. Towards the end of the 1970s, national and construction output were growing again. 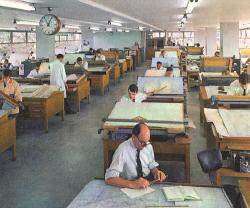 Replaced by CAD, the drawing office is now history. This is Drake & Scull at Highgate in London in 1967.

Perhaps it was due to these challenging and turbulent times that HVCA membership more than trebled during this 25 years from 328 in 1955 to 1074 companies in 1979. Inflation also had a major effect on pay levels, with the craftsmen rate of the equivalent of just under 20 p in 1955 to over 10 times more, with a fitter rate of £1.85.