The force behind the setting up of the forerunner of the Heating & Ventilating Contractors’ Association and its first president — David Mein Nesbit of Ashwell & Nesbit.
With new and developing technologies to provide better-serviced buildings came conflict between the traditional skills of plumbers and the new breed of heating engineer. It was the need for representing the special interests of contractors that led to the formation of the forerunner of the Heating & Ventilating Contractors’ Association.As the nineteenth century turned into the twentieth century the business of installing services in buildings was as controversial as it ever has been. Difficulties with payments was a major issue. Local-authority contracts, for example, included a 5-year maintenance period, with half the payment on certification of completion and final payment 12 months later — on certification that plant was working efficiently and in good repair. Unfair tendering practices were rife, but it was a demarcation dispute between heating engineers and plumbers that finally prompted the need for the setting up of an association to represent the special interests of contractors. Behind the demarcation issue was who should install pipework. Labour employed in the heating and ventilation industry was drawn from engineering, not the building industry. The crunch came at the very end of 1899 when plumbing operatives went on strike in protest at heating engineers employed by Ashwell & Nesbit installing DHW pipework at Leicester Isolation Hospital. It was at that time that David Nesbit was president of the Institution of Heating & Ventilating Engineers. Formed in 1897, IHVE was a forerunner of CIBSE, the Chartered Institution of Building Services Engineers. Although set up to discuss technical issues, IHVE sometimes discussed other matters, and it was in April 1900 that David Nesbit called together leading employers over the demarcation issues, who supported Ashwell & Nesbit’s stand at Leicester. Some of the company names are familiar to this day: G. N. Haden, Rosser & Russell and Benham & Sons. Worsening situation The situation for heating engineers worsened when employers and architects withdrew the opportunity for heating engineers to tender for plumbing work, fearful of labour problems and disputes. Plumbers were even awarded heating contracts. The suggestion that working with lead would remain the sole province of plumbers and that either trade could work with iron, copper and brass appeared to be the way forward. Unfortunately, despite representative bodies, including IHVE, agreeing, the plumbing operatives themselves did not. Tensions continued to build up, so much so that a growing number of organisations saw the need for an association to represent the interests of heating contractors. It was in January 1904 that David Nesbit declared; ‘The proposed association was not in any way opposed to the Institution of Heating & Ventilating Engineers; that it was an institution for the furtherance of knowledge concerned with heating and ventilation, whilst the new society would watch the commercial interests of contracting engineers.’ From that meeting emerged the National Association of Master Heating & Domestic Engineers. Its first official meeting was in March, and David Nesbit was elected president. The first council meeting was on 14 June 1904, regarded by the Heating & Ventilating Contractors’ Association as its centenary. The 14 founder members were joined by six more at that meeting. 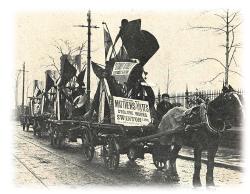 Not only has fan technology changed since the 1890s, but so too has the method of delivery.

The association continued to develop and grow until the beginning of the First World War in 1914. The demarcation difficulties suddenly eased, and output grew rapidly. Training A formal approach was identified, and in 1919 the National Joint Industrial Council was set up to promote and regulate the training of craft apprentices. On the commercial front, the National Agreement was accepted by the Government as a National Industrial Agreement. That was in 1920. The emphasis on training continued with courses at the Borough Polytechnic in London. Courses for draughtsmen were also organised, as well as day-release courses for craft and student apprentices. 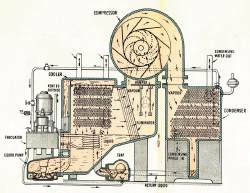 The Carlton Theatre in London’s Haymarket was the UK’s first air-conditioned cinema in 1927. It was served by Carrier chiller plant.

Reflecting its representation of employers’ interest, the association was renamed in 1927 as the National Association of Heating, Ventilating & Domestic Engineering Employers.