Multi service chilled beams can accelerate installation times, save energy and reduce maintenance, thereby dramatically cutting the whole life cost of an air conditioning system. GUY HUTCHINS explains.Total cost of ownership (TCO) is like fog — you know it when you see it, but it’s a phrase that tends to obscure more than it reveals. After all, how can you measure something as intangible as ownership? This question has put many people off looking more deeply into the subject, but TCO is worth pursuing because a grasp of its principles can result in significant cost savings over the lifetime of a building. Better understanding One way to gain a better understanding of TCO is to look at the whole-life cost of a construction project. By considering the project in these terms, rather than limiting the calculation of value to initial purchase price, the developer — who may be responsible for a building for 25 years or more — can save thousands or even hundreds of thousands of pounds. There are a number of definitions for whole life costing (WLC). For example, ISO 15686 says it is: ‘A tool to assist in assessing the cost performance of construction work, aimed at facilitating choices where there are alternative means of achieving the client’s objectives, and where those alternatives differ, not only in their initial costs but also in their subsequent operational costs.’ Industry group Constructing Excellence has a more succinct definition: ‘The systematic consideration of all relevant costs and revenues associated with the acquisition and ownership of an asset.’ Comparing options In other words, whole life costing is a means of comparing options and their associated costs over a period of time. The easiest way to tackle the subject is to break the project down into individual elements. For this article, I intend to concentrate on the air-conditioning system, specifically multi-service chilled beams (MSCBs). Developers have tended to work on the basis of keeping capital costs low to provide the best return on their investment. However, a system’s running, maintenance and replacement costs have a more important bearing on how much it will end up costing. Thus, it becomes essential that consultants and contractors are aware of the most appropriate cost-effective, low-energy products available. MSCBs offer economical cooling via a chilled-water coil and can incorporate light fittings and an array of services, including sprinkler heads, PA speakers, smoke detectors, PIR sensors and fresh air. Running costs Delivering building services in this way dispenses with the need for suspended ceilings, a major cost saving in itself. But one of the biggest parts of the whole-life-cost calculation involves looking at running costs and, more specifically, how much energy is used. In a paper to the CIBSE technical conference last year, Simon Law, an associate at Faber Maunsell, and I presented the findings of a desktop analysis to compare the costs of chilled beams and fan coil units (FCUs) based on a typical 10 000 m2 office. We considered the building façade for a highly glazed (90%) and moderately glazed (40%) building. We used two methodologies to estimate the energy efficiency in these buildings. • Whole building carbon performance rating (CPR), which estimates the likely performance of building-services systems using design information, then compares them against benchmarks to predict the potential for efficient operation of the building services systems. • The carbon-emissions calculation model (CECM), which focuses on the energy consumption predicted by the thermal model and allows the proposed building to be compared against an elementally compliant model to show that the carbon emissions are comparable. 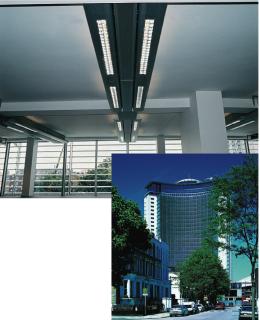 By avoiding the installation of suspended ceilings to conceal services, the use of multi-service chilled beams in the refurbishment of the Empress State building in London has addressed the issue of limited slab-to-slab heights.

The analysis based on the CPR method showed there was no significant difference between FCUs and chilled beams in terms of the installed plant capacity. However, the CECM calculation method, which will be integral to the new Part L of the Building Regulations, goes beyond installed plant capacity to look at actual annual energy consumption. This is where the benefits of using a chilled-beam system come in, by increasing the seasonal coefficient of performance of the chiller plant and reducing fan power. Comparison of a suspended ceiling and multi-service chilled beam in providing a similar range of services. Note just how much can be integrated into a multi-service chilled beam.
In the 90% glazed building — where the chilled-beam option has a higher fresh air rate — the heating energy used by chilled beams is around 20% higher, but this differential would be less with the use of heat recovery. In the 40% glazed building, the increase in heating energy is around 6%, primarily due to reheating the dehumidified fresh-air supply. However, we also calculated the carbon emission for both systems and found that the chilled beam option would deliver a net reduction in annual carbon emission of 5 to 7% compared with FCUs. Cost study We are not alone in concluding that MSCBs offer significant advantages. In a study carried out by cost consultant, EC Harris, the whole-life cost of employing MSCBs was reported as extremely favourable when compared with traditional FCUs. The report concluded that a traditional 4-pipe fan-coil air-conditioning system, compared with MSCBs fixed to a concrete slab, are cost neutral when total system capital cost is considered. The diagrams show examples of typical system requirements. Further, the whole-life cost of the MSCB, in the same comparison, was a third lower than the FCU due to its reduced running and maintenance costs. Guy Hutchins is marketing manager with Trox UK, Caxton Way, Thetford, Norfolk IP24 3SQ. Multi service chilled beams offer several whole life cost advantages over traditional fan coil units, which may be summarised as follows. Lower maintenance. Chilled beams have no filters to change, and there are no moving parts, filters or fans, which minimises the impact of the system on the user of the space. Reduced capital cost. Comparisons usually favour fan coil units by a few percentage points. However, exposed chilled beams do away with suspended ceilings (and their associated cost). Reduced building cost. Because the height of the building can be lower with exposed multi-service chilled beams, they reduce construction costs or allow additional floors to be constructed. Accelerated programme. Exposed multi-service chilled beams containing integrated lighting, public address systems and other services, accelerate the construction programme. Cheaper running costs. Chilled beams use water for cooling and take advantage of free cooling, which saves energy. Production, not construction. Beams are prefabricated in the factory, leading to a shorter production cycle and fewer trades on site. This also improves quality and safety. Lower floor to slab height — making them ideal for recycling 1960s buildings.