The importance of clean systems

Scale in this cast-iron boiler section caused a fracture within a year.
If the water and pipework in HVAC systems is contaminated, the consequences can be expensive. GLENN SIMPSON highlights the benefits of clean systems.The evidence supporting the link between well maintained clean piped-services systems and optimal energy transfer is well documented. Just 2 mm of rust can reduce heat transfer by 5% across component surfaces. Scale has a more significant effect; a layer as thin as 0.5 mm will cause a 4% loss. Removing scale and poor thermal conductivity is estimated to cost UK industry £1 billion a year. In addition, scale, corroded surfaces and stagnation in blocked pipelines can provide suitable conditions for bacterial contamination and biofilm growth. Biofilm on heat-exchanger surfaces is four times as resistant to heat transfer as calcium-based scale. The consequences are demonstrated by independent thermographic imaging of cooling fins in a chilled-water system before and six months after cleaning showing significant improvements in fin efficiency. Uniform temperature distribution was restored across the fins, and the frequency and intensity of hot spots was reduced. Since the cleaning, only two of the four 18.5 kW pumps operate to sustain the required cooling effect at peak demand. Another project demonstrating the undesirable effects of contaminated pipework is heating systems serving over 40 sheltered-housing and community-heating schemes in Aberdeen. Alan McPherson, energy assessor, and Ronnie Ferguson, technical officer with Aberdeen City Council, were experiencing difficulties delivering reliable space heating because of problematic LTHW systems in the properties. A condition survey was commissioned, and a cleaning programme introduced soon after. After one heating season, an internal energy report shows an average 8% reduction in energy consumption in the cleaned systems compared with untreated systems, where consumption has increased. Further savings are expected during the current heating season following the cleaning of more systems. The cleaning process in Aberdeen used a combined dirt and air separator and water-conditioning device installed as a side-stream filter across the primary circulation pumps. The water was filtered to less than 10 µm, the collected particles concentrated and backwashed to waste using small volumes of mains water. The calcite-dolomite reaction medium in the filter bed stabilised the chemistry of the system water by changing pH, alkalinity and hardness. The process is self-regulating and continuously adjusts to achieve the design chemical buffering against system top-up. By stabilising the chemistry, the treatment prevented active corrosion by stopping the production of particulates and further deterioration of the system water. Excellent water quality The cleaning process and maintaining good water quality reduced resident disturbance and complaints received by the council’s technical-services department. Expensive call-outs to the sites by the council’s maintenance contractor due to lack of heat or blockage of in-line strainers and valves fell off rapidly. 15 months after the cleaning process began, the water quality remained excellent. In particular, concentration of metal ions was well below BSRIA levels (dissolved iron was down from 0.78 to less than 0.04 mg/l and copper from 0.21 to less than 0.04 mg/l). The pH rose from 8.8 to 9.5, and the water had a turbidity of less than 1. Although the Aberdeen case deals with soft water, it highlights how water’s inherent properties and variable quality can present a major operational issue for HVAC systems in general. The instant that water enters an HVAC system, it reacts physically, chemically and biologically, generating processes that are inter-related and fuel one another’s development. They include corrosion scaling, bacterial contamination and general fouling. Sensitivity HVAC system components have changed considerably over the last decade, and improvements have led to more efficient and smaller plant with thinner and narrower components. The result is invariably greater sensitivity to poor water quality. This is particularly relevant when new components are retrofitted to existing pipe systems, as their design efficiencies can be severely compromised by poor system-water quality. Refurbishment and new-build projects require major capital investment. Their associated long-tem operating costs and energy consumption have a significant impact on the environment and the operator’s profit. 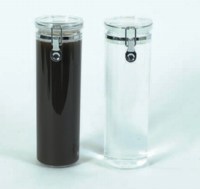 The before and after of system treatment for a project in Aberdeen.

To maximise the return on investment and minimise the impact for the wider environment, structural integrity and design efficiency must be protected and maintained. To realise this in full, a greater awareness and higher priority status needs to be assigned to the energy carrier itself and how best to ensure it remains clean throughout the life of the HVAC system. Glenn Simpson is with ENWA, The Old School, 57 High Street, Ibstock, Leics LE67 6LH.