The white ‘smoke’ that emerges from the flues of condensing boilers is actually clouds of condensate — an effect known as pluming.
The increasing use of condensing and high-efficiency boilers is accompanied by issues of flueing. JULIE MOORE examines them.Today’s boilers are markedly different from the products on offer in the past, and there is obviously a need for flue design to change to meet the challenges. Flues have been affected by recently introduced regulations. The British Standards for the manufacture of flues are now superseded by European Standards under the Construction Products Directive (CPD), and the harmonised norm for metal chimney systems is now BS EN 1856-1:2003 Requirements for Metal Chimneys – part 1: System Chimney Products. All metal flue and chimney products are now required to carry CE certification to ensure they meet the European Standard and perform to the specifications for the system they are installed in, with every component of the product identified with its classification to Standard EN 1856-1 to include the temperature rating of the flue, its pressure rating and condensate resistance for wet or dry systems. Regulations alone have not changed flue design criteria. The market has also influenced flue requirements because of the drive by the Government for energy-efficient solutions, with the result that condensing and high-efficiency boilers are being installed more often. These boilers have created the need for change in the design of flue systems, as they require a solution for dealing with high levels of condensate from the saturated gases, while remaining leak free. Flue options now need to be considered fully within the context of the building design, with due regard to the current regulations and a dose of common sense. Flues under pressure Flue design requirements for condensing and high-efficiency boilers are different to flue design for traditional boilers and gas vents. For example, an atmospheric boiler does not work under positive pressure, and the design relies on creating a natural draught in the flue. Flue-gas temperatures are generally higher, and there is some buoyancy in the flue gas. In such circumstances, it is common to use twin-wall insulated flue components to retain whatever heat there is in the flue gas. 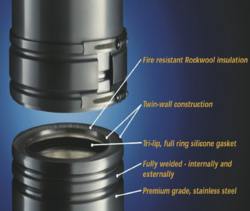 Boilers that operate with a positive pressure in the flue, such as condensing and high-efficiency, require flues designed for the purpose to retain condensate and eliminate leaks.

Working under suction, atmospheric flues could tolerate simple joints between components, but all this has changed with the growth in high-efficiency boilers. Most high-efficiency and condensing boilers use a fan as an integral part of the boiler to assist the evacuation of flue gases. The fan helps to overcome loss of buoyancy due to lower flue-gas temperatures. However, introducing a fan creates a positive pressure in the flue, so flue components must have joints between components that are both pressure tight and water tight, to retain condensate in the flue. Hamworthy’s Masterflue range of fully welded stainless-steel components incorporates a factory fitted tri-lip, full ring silicone gasket which provides a leak proof, high-temperature seal impervious to water and vapour. Condensate management All boilers create some condensate from cold start. In traditional boilers, once operating temperature has been reached, condensation ceases.   High-efficiency condensing boilers are designed to operate in condensing mode for as long as possible, thereby achieving higher efficiency. Flue systems must therefore be designed to manage that condensate, which will be present most of the time.   Condensation is a characteristic of condensing and high-efficiency boilers working at low temperatures. The resulting moisture in the flue can, if not dealt with, cause corrosion and leaks and unsightly discolouration in the surrounding area of the flue or chimney. The volume of condensate is directly related to the return temperature of the system water and the firing rate of the boiler. Much of the condensate will be disposed of at the boiler, but there will still be considerable levels of condensate present in the flue system itself.   The system should incorporate components which facilitate easy draining of the flue, particularly in horizontal sections where typically a 3° degree slope to a drainage point will be recommended. Masterflue components from Hamworthy include 87 and 43° elbows with the slope built-in, making it easier to achieve the slope without creating mis-alignment and undue stress on components. Tru-align wall brackets complete the installation, allowing for misalignments in the building structure.   Drain connections on the flue should run to a tundish and then to a suitable drain, using PVC waste pipe with solvent sealed joints. Condensate is typically 3.5 pH, slightly acidic, but less so than vinegar, and can be disposed of normally through the drainage system. If there is any doubt about local regulations, check with the local water authority. Single- or twin-wall flue Whilst many manufacturers advocate single-walled flues for condensing boilers, certain factors must be taken into consideration. The boiler must only ever work in condensing mode to maintain safe external temperatures on the flue. However, while single-wall flues are generally accepted as being the correct choice for condensing boilers with long external runs and where condensation freezing in winter could be an issue, it is not incorrect to install a twin-walled flue. Plastic flues As condensing boilers have low flue-gas temperatures, specifiers can use plastic flues for certain applications. Boilers such as Hamworthy’s Milborne condensing wall-hung range, can safely work with a polypropylene flue. These boilers have a flue-gas temperature of 55°C when condensing at 50°C, enabling them to use a Class B1 fire rated 50 mm polypropylene flue system with a flue run of up to 30 m. Plastic flue headers can connect up to three Milborne 502 boilers using 50 mm-diameter pipes into a single 125 mm-diameter flue for exiting the plant room. These plastic components also incorporate a silicone ring seal to ensure simple push-fit watertight joints. What about pluming It is not uncommon for someone to suggest the boiler is on fire when they see white ‘smoke’ emerging from the flue of a condensing boiler. This is clouds of condensate, the effect of which is known as pluming. Pluming can be a problem despite the correct siting of a flue, so common sense must prevail. With a balanced flue going straight out through the wall, the resultant pluming may be a problem. It could be considered unsightly by the end-user, it may affect the aesthetics of the building’s design, or it may cause a problem for passers-by. Often a far better solution is to have flued the boiler to a high-level terminal, such as a rooftop, where it will not be less visible. In general the siting of a flue terminal or its construction, whether metal or plastic, is a matter of careful consideration, taking into account the regulations and common sense. Julie Moore is flue-systems contract manager with Hamworthy Heating Ltd, Fleets Corner, Poole, Dorset BH17 0HH.