Looking to the future of office lighting

The delivery of low-energy buildings that interact with the environment is just one of the factors that will influence the design of office lighting, as HUGH KING explains.urveys show that by the end of the decade nearly 70% of the UK’s workforce will still be employed in offices. It is estimated that these people will spend about 80 000 h of their life working in these establishments, have up to 10 jobs in their career and that the number aged over 60 is set to double. Good-quality lighting remains an essential part of office design. Without it, human activity will be seriously diminished and valuable energy wasted. Quality, then, is the single word that best sums up the future for office lighting. Since the Kyoto Protocol, the lighting industry has been responding to the cry for energy-efficient lighting to reduce emissions of carbon dioxide with developments such as the T16 (T5) and compact fluorescent tubes and advances in metal halide — not to mention progress in electronics and controls. With these technologies well established, the scene is set for a new era based on quality as well as efficiency. Inclusive lighting design This new move will be reinforced by the new age of inclusive lighting design, which has been influenced by a general demand for improved building design on the one hand and changing working tasks on the other. In the past, most office buildings were deep-plan and sealed, lit by masses of recessed modular fittings in suspended ceilings. That, though, was before global warming! In the future, the approach must be to deliver less energy-hungry buildings and luminaires — hence the rise of natural ventilated and chilled buildings and indirect/direct luminaires. The former’s trough profiled concrete ceilings eliminate the need for conventional suspended ceilings and thus impact greatly on luminaire design. In effect, the design of the ceiling plane and luminaires has been returned to the architect, setting the trend for indirect/direct lighting or ‘rafts’ integrating other services and using lighting controls. The same can be said of chilled ceilings, be they panels or beams. There is a natural desire to use as much of the ceiling as possible for the cooling elements, which restricts space for the luminaires — leading to the demand for slimmer, smaller fittings. Let us turn our attention, albeit briefly, to the internal arrangement of the office workplace. Its fundamental role is going through an existential shift. The office will no longer be a centre of corridors, concentration and privacy, but, rather, an energetic, open, flexible space for interaction and group activity. 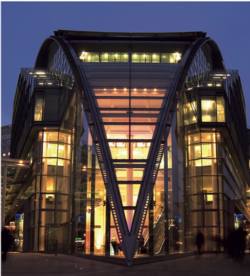 Air-handling lighting is a feature at the Cardinal Place offices in the Victoria area of London. Special 750 mm-square recessed luminaires employ 14 W T5 lamps and central louvres. The building has been awarded a BREEAM ‘very good’ rating for energy efficiency (12 W/m2).

Office spaces will be smaller, but areas within them will be more flexible. As eyes age, they become less sensitive to light. After the age of 45, visual ability to do difficult tasks reduces rapidly, but suitable lighting is rarely provided today. This is underlined by recent research, which recommends that the lit office environment could be enhanced by focusing on a number of inclusive design principles. • Light for health — increasing the spectrum of light provided for added visual and non-visual functionality. • Light for wellbeing — varying light qualities through daily programmes to create an emotional and psychological link between our bodies and the time of day. • Light for individuals — providing end-users with intuitive control over their own lighting, allowing office workers to meet their individual ergonomic needs. Shortcomings The study by Matthew Harrison at the Royal College of Art’s Hamlyn Research Centre identified key aspects of human behaviour and ergonomic needs that demonstrate the shortcomings of current office lighting systems. A major finding was the need to centre technological advances around effective and intuitive control interfaces. The research suggests, ‘Older and younger workers could benefit from adjustable lighting systems, helping to ease the individual frustrations of a shared environment. Dynamic lighting that varies throughout the day also provides emotional (and possibly physiological) harmony with the time of day, helping workers to pace themselves and regulate their body clock.’ Not surprisingly, the consequences of an aging workforce result in several necessities for lighting facilities. A simple on/off switch will no longer suffice. Control or variation must lie with the individual in such a delicate way that both the individual and the group can be catered for. As we age, we need better quality light, and, at times, more light. The workplace has yet to take heed of this in preparation for the predicted seismic shift in office demographics. Now this is likely to change. Concluding thoughts Tomorrow’s history will be defined by the success of today’s development programmes and exemplar architectural projects. These are aimed at enhancing the value and quality of office lighting in the human environment. Such progress will be influenced by advances in electronics and new materials. Electronics will overcome the comparative intractability of discharge and fluorescent light sources, enabling them to change output level and even colour appearance. Such is the pace of micro-miniaturisation that these new light sources will be extremely thin, almost wafer-like, with no heat or control worries. High frequency will be a way of life, and fittings will be voice-instructed to give us the required colour, brightness and stimulation —in short, better-quality office lighting. Hugh King is with Thorn Lighting Ltd, Silver Screens, Elstree Way, Borehamwood, Herts WD6 1FE.