Fig. 1: Adiabatic precooling can reduce the temperature of the air on to the coils of BAC’s Trillium dry cooler from, say, 32 to 24°C — considerably reducing the power consumption of the air-conditioning compressor.
How the heat is rejected from an air-conditioning system has a significant effect on its power consumption. BAC Balticare has been developing new approaches.Cooling towers as a method of heat-rejection from air-conditioning systems have significant environmental benefits over dry cooling. Because their ability to reject heat depends on the ambient wet-bulb temperature rather than the dry-bulb temperature, the refrigerant can be cooled to a lower temperature. Bob Macleod-Smith, managing director of cooling-tower specialist BAC Balticare, explains, ‘Evaporative condensers are widely used in industrial-refrigeration and air-conditioning systems to condense refrigerant directly. They are capable of achieving condensing temperatures as much as 10 K lower than air-cooled alternatives. This translates into a major energy-efficiency benefit for the system as a whole, since compressor power consumption decreases by about 3% for every 1 K lower condensing temperature.’ 10 K times 3% speaks for itself in terms of reduced energy consumption. That is not just manufacturer hype, since the benefit is formally recognised by the inclusion of evaporative condensers on the UK Technology List, so that their installation qualifies for Enhanced Capital Allowances. The energy-efficiency potential of cooling towers is often not exploited for air-conditioning systems for one simple reason — the risk of Legionnaires’ Disease. It is for this reason that installations of cooling towers have to be registered. While properly maintained cooling towers have never been associated with an outbreak of Legionnaires’ Disease, their use for heat rejection is frequently avoided. Prompted by environmental and regulatory pressures to use resources efficiently, BAC has developed a new range of cooling towers that use less energy and, importantly, less water. Among them is a new type of heat-rejection product that realises many of the benefits of a cooling tower without actually being a cooling tower — and not requiring registration as such. Called Trillium, it is basically a dry cooler with adiabatic cooling to reduce the temperature of the air onto the coil. By this means, the dry-bulb temperature of the air onto the coil could be reduced from, say, 32°C to 24°C — just 2 or 3 K above wet-bulb temperature (Fig. 1). One of the benefits is to increase cooling capacity by up to 40%. Adiabatic operation is intended to be used for short and limited periods, enabling the power required by the compressor to be reduced under peak-load conditions. One of the undoubted benefits of air-conditioning systems with inverter drives is that they are more efficient at part load than at full load. Adiabatic cooling enables the peak electrical load to be reduced, with benefits for the electrical supply system. The technique could also enable a smaller condenser to be installed. Operational safety is ensured by water being used only once and then passing to drain. Only part of the water that is supplied is evaporated, with the excess helping to rinse the evaporation pads to keep them free from minerals and debris that would stay on them if all the water was evaporated. Controlled adiabatic cooling is also applied to two other BAC products — the HXC water-saving evaporative condenser and the HFL dry/wet closed-circuit cooling tower. The concept is to optimise the use of water and energy. The cost of water, including its treatment, is £2 to £3 per cubic metre, so there is a strong case for not using too much of it. 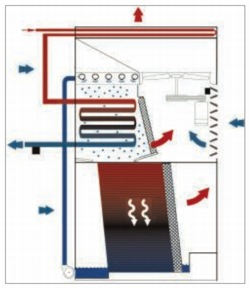 Fig. 2: BAC’s HXC water-saving evaporative condenser has two coils — one for dry operation and one for wet. Depending on the ambient temperature, the dry cooling can have the temperature of the air on to it reduced by adiabatic precooling.

HXC and HFL products both have two cooling coils — one dry and one wet. They can operate in three modes to achieve large savings in water consumption (Fig 2). • Entirely dry for about four months of the year. • Adiabatic precooling of air onto the dry coil. • Combined wet-dry operation at the height of the summer. The HXC water-saving evaporative condenser is said to be the first condenser that takes full advantage of evaporative cooling to achieve low condensing temperatures but using air-cooled technology to save water when the condensing load or ambient temperature falls. Heat rejection capacity is primarily controlled by modulating the airflow through the unit using dampers. Airflow can also be controlled by variable- or 2-speed motors. Judicious use of the various operating modes of the HXC enables water consumption to be halved compared with a conventional evaporative condenser when the condensing temperature is allowed to float downwards or 60% at a fixed condensing temperature. Likewise, optimal use of the intelligent controls package of the HFL closed-circuit cooling tower enables water consumption to be reduced by 40% compared with a conventional cooling tower. Since global warming will increase the need for cooling, it is entirely appropriate that attention should be given to all aspects of reducing the resources needed to deliver that cooling. These technologies, especially Trillium, could also help reduce the carbon footprint of buildings as required by the new Building Regulations to achieve planning permission.