The impact of climate change on modern building services

Fig. 1: Some expected climate changes for the UK. (From UKCIP02 Technical report)
Jacqui Harman summarises the most important effects of climate change for building services.It is now widely recognised that climate is changing. The Intergovernmental Panel on Climate Change (IPCC) quote that most of the observed warming in the past 50 years is attributable to human activities. These changes will have impacts on building services. In the UK, the temperature could increase by 0.5 to 3.5 K by the 2050s. There will also be increases in winter precipitation and probable decreases in summer precipitation. This paper outlines how climate is expected to change in the UK, and some of the impacts for buildings. The UK Climate Impacts Programme The UK Climate Impacts Programme was established by the Government in 1997 and is funded by the Department for Environment, Food & Rural Affairs (Defra). UKCIP helps organisations assess how they might be affected by climate change, so they can prepare for its impacts. It co-ordinates and integrates stakeholder-led assessments of climate-change impacts at a regional and national level, and provide tools (such as the UKCIP02 climate-change scenarios and a risk, uncertainty and decision-making framework) and guidance throughout the process for stakeholders and researchers. Within the UKCIP framework, regional scoping studies on climate-change impacts have been undertaken for all parts of the UK, and regional climate-change partnerships, led by key regional decision makers, have been established. UKCIP has a large portfolio of projects funded by the Engineering & Physical Sciences Research Council (EPSRC), ‘Building Knowledge For a Changing Climate (BKCC)’. It focuses on how various aspects of the built environment will need to respond to climate risks. (Further details at the website below) Climate change in the UK Global climate is changing. Globally, the 10 warmest years on record have occurred since 1990. In the UK six of the 10 warmest years since records began in 1659 have occurred since 1990. Current climate models predict that global temperatures will rise by a further 1.4 to 5.8 K by the end of the 21st century. Temperatures in the UK are expected to rise by a similar amount, with the UKCIP02 climate-change scenarios1 indicating that by the 2050s temperatures could be between 0.5 to 3.5 K higher. There will also be changes in other climate variables — rainfall, humidity etc. Changes in climate will affect different aspects of the built environment, including the external fabric, structural integrity, internal environment and service infrastructure (e.g. drainage). Table 1 summarises some of the changes, and possible impacts, that could be expected by the 2050s. Fig. 1 illustrates how temperatures might change. Changes in some climate variables will be more important than others for building services. Some of the key changes with implications for this sector include increased temperatures, and associated changes in heating and cooling degree days. Although the UKCIP02 scenarios refer to the external environment, inferences can be made about how the internal environment of the building might also change. These changes in average temperature will mean buildings will require less heating during cooler months, but more cooling during summer months. An increase in the occurrence of extreme warm days will also mean an increase in the number of days buildings need cooling. Fig. 2 shows the probability of exceeding summer daily maximum temperatures in central England’, which is a roughly triangular area of the United Kingdom enclosed by Bristol, Manchester and London. From this graph we can see that an event exceeding 31°C currently has a probability of occurrence of 1% each summer, or about one day per summer. By the 2080s this same event of 31°C will have a probability of occurrence of about 10% each summer, or 10 days per summer, and the event with a probability of 1% will be 39°C. 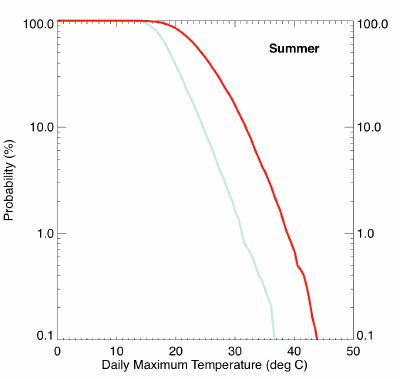 Fig. 2: The probability of exceedance for daily maximum temperature in Central England, which is a roughly triangular area of the United Kingdom enclosed by Bristol, Manchester and London, in summer for modelled baseline (1961-90) (grey) and for the medium-high emissions scenario for the 2080s (red). The probability expressed is the probability of the event being exceeded on any given day in the summer season (June/July/August).

Precipitation (rain, hail and snow) and sea level will also change, although these changes are likely to have limited impacts on building services. Precipitation might decrease in summer and increase in winter. It is likely that there will also be more deep depressions in winter, bringing strong winds and intense rainfall. Changes in precipitation are likely to have a greater impact on the building exterior than on building services. However, increases in damp conditions could result in increased problems with mould. Cloud cover is expected to decrease in summer and increase slightly in winter, with the largest summer decreases occurring in the southern UK. Shading of buildings will become more important as a result. Specific humidity will increase in all seasons and regions. However, relative humidity is expected to decrease over the whole UK in summer due to increasing temperatures. Most regions will see a decrease in relative humidity in other seasons also. These changes could affect human comfort and mould growth in the interior of buildings. Changes in wind speed due to climate change are very uncertain, but they are expected to increase in winter and decrease in summer. These changes will be of importance to building design and structure. Conclusion We are already witnessing changes in our climate. Therefore, climate change is a current (not a future issue), and we need to start planning for and adapting to it now. Those involved in planning, design and constructing buildings should take account of the expected climate over the lifetime of the building and its services. Typically, buildings last for 20 to over 100 years, and internal structures and fittings for 15 to 25 or more years, so those who ignore climate change risk creating buildings that will be expensive to run and maintain, and uncomfortable to inhabit. Jacqui Harman is scientific officer with UK Climate Impacts Programme, Union House,12-16 St Michael’s Street, Oxford OX1 2DU
enquiries@ukcip.org.uk Footnote 1: HULME, M., JENKINS, G.J., LU, X., TURNPENNY, J.R., MITCHELL, T.D., JONES, R.G., LOWE, J., MURPHY, J.M., HASSELL, D., BOORMAN, P., MCDONALD, R. AND HILL, S. Climate Change Scenarios for the United Kingdom: The UKCIP02 Scientific Report. Tyndall Centre for Climate Change Research, School of Environmental Sciences, University of East Anglia, Norwich, UK. 2002. Table 1: Expected changes in UK climate (based on the UKCIP02 climate change scenarios1) and some impacts on building services. (Quantitative statements are deliberately avoided; see the UKCIP02 Technical Report for detailed data)