Why every problem needs a different solution Efficient boilers do not necessarily make for an efficient heating system — Graham Williamson.
Prescriptive regulations for boiler plant in commercial buildings will not always lead to the most efficient heating system being installed. There are many factors to be considered, as GRAHAM WILLIAMSON explains.Over the last few months, representatives of Defra, ODPM and ICOM, the commercial-heating trade organisation, have been in ongoing discussions in an attempt to gain a common understanding on the new regulations and their impact on industry. If the initial Part L2 proposals announced last August had gone through unopposed, there would have been far-reaching implications, not only for suppliers and manufacturers but also on the industry itself. The main areas of concern were feasibility of the stringent efficiency targets set, particularly for replacement work, and the tight timescales given to industry to introduce the changes. Climate change There are few in the industry — or indeed society — who will argue against measures to tackle climate change. At Ideal we are fully supportive of the drive to reduce carbon-dioxide levels. Our objective, along with other members of ICOM, has been to highlight the fact that there is not a ‘one-size-fits-all’ solution for the non-domestic heating sector. For the first time, seasonal efficiency is being used as a measure to conform to Building Regulations. This is far from straightforward as it is difficult to find one model, or formula, that can be applied to the diverse range of commercial applications. A number of variables can affect seasonal-efficiency performance, as it is not only a measure of the boiler performance, but how the boiler performs within a heating system. Performance is also determined by type of building and its use. For example, boilers in leisure centres will have all-year-round demand for hot water. In contrast, those in office buildings will be hardly used during the summer. Difficult All these factors mean it is difficult to gather robust data on seasonal efficiency to formulate performance levels that will be effective across the commercial sector. Installations are another area where there is no universal principle that can be applied. In domestic properties, installation practices follow along similar lines, be they multi-storey town houses, flats or terraced properties. In contrast, there are fundamental differences between the heating and hot-water needs of a hotel, compared to a school or a church. Revise proposals Although details are yet to be completely finalised, the revised proposals see a single efficiency figure established for both new-build and replacement applications coming into force on 1 January 2006. The new-build sector, which accounts for around 30% of installations each year, could potentially move to condensing-only technology. Whilst not without its problems, the design of a new building can be better controlled, therefore ensuring easy interface of condensing technology. However, taking into consideration the unique and complex nature of existing non-domestic heating installations, it is proposed that a credit scheme be introduced in the replacement sector. The move is designed to allow system upgrades, such as heating-load calculations, building load assessments or upgrades to system controls, to qualify for credit points that can be used to offset against agreed seasonal efficiency targets. Changing demands Traditionally, commercial boilers being replaced will already have been running inefficiently for some time, mainly due to age but also because the design and use of many buildings will have changed. Alterations in use and innovations in the fabric of many buildings have led to changing demands on heating and hot water in modern workplaces. The advent of open plan offices, double glazing, air conditioning, improved insulation and the increased use of IT equipment —with its associated heat gains — have left many boilers grossly oversized. Simply replacing an existing boiler will not necessarily improve efficiency. The proposed credit scheme will require assessment of the heating load requirements and system control upgrades to suit modern heating demands. This will ensure optimum operation of the system, allowing a correctly sized standard efficiency boiler to offer similar carbon savings to an equivalent condensing model. After all, a condensing boiler is designed to condense; if a system cannot allow it to do this, it is questionable why one should be fitted in certain replacement installations. 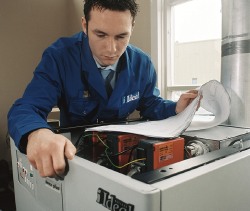 The drive to condensing-boiler technology remains the long-term air. Imaxplus floor-standing condensing boilers from Ideal Boilers are available with outputs from 40 to 280 kW, all modulating down to 11.6 kW.

A further debate is yet to be concluded on exceptions, especially in new build, where it may not be possible or practical, to install condensing technology. Hospitals, large multi-storey buildings and district heating schemes are three examples of developments where higher water temperatures are required to maintain heating temperatures throughout every part of the building. Condensing technology may not be able to meet these demands, so other solutions need to be considered. Long-term aim It is widely accepted that the drive to condensing technology remains the long-term aim, but the industry must be given time to prepare for this wholesale change. In the interim, the Government has recognised the benefits of correctly sized and specified standard-efficiency technology. This acknowledgement allows for a wider choice of solutions to help tackle carbon emissions, appropriate to the myriad of commercial applications. Only with common sense and co-operation can we meet all our environmental ambitions. Graham Williamson is business director, commercial heating with Ideal Boilers Ltd, National Avenue, Hull, North Humberside HU5 4JN.