The use of web technology provides a user interface that is crucial to achieving the full potential of a building-management system.
Recent legislation means that sacrificing energy efficiency to cut costs is no longer an option in building projects. In many cases, however, money can be saved without sacrifice by using an efficient and effective building-management system (BMS). ALAN ASHMORE explains.European Directive 2002/91/EC, aimed at promoting improvements in the energy performance of buildings, became European law on 4 January 2002. The UK Government has three years to implement its provisions, which means that they come into force in just a few months’ time, on 4 January 2006. Energy performance Among those provisions are minimum standards for the energy performance of new buildings. Similar standards are also defined for existing buildings of over 1000 m2 when they are renovated. Certification schemes are introduced, along with requirements for the prominent public display of building energy-efficiency certificates. Clearly, energy efficiency has moved to centre stage. The fabric of modern buildings is therefore usually designed from the outset with good energy performance in mind, but this does not necessarily mean that the best possible performance is always achieved. With poor control over its services, even the best of new buildings will be wasteful in its energy usage. In existing buildings, where extensive structural modifications to improve energy efficiency may be impractical, effective control has an even greater influence on energy usage. In short, for both new and existing properties, an efficient building-management system is the key to maximising energy efficiency. If it is to fulfil its full potential for saving energy, however, the BMS must be chosen, configured and installed with care. In particular, it must be provided with detailed information about the building that it is controlling. Sensors This means not skimping on the installation of sensors which monitor, for example, temperatures and light levels. It also means that it is important to provide adequate sub-metering for electricity, water and gas supplies, so that changes in usage can be quickly identified and tied to particular areas or activities. 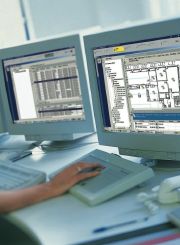 A good BMS can do much more than providing effective real-time control. It can also collect and analyse data about every aspect of the building’s operation — thus revealing areas of excessive energy consumption that may be symptomatic of a problem.

Another important consideration is zoning. In the past, there has been a tendency to minimise the number of control zones associated with the BMS to a minimum to minimise installation costs. This is false economy, as it often means that large areas of a building have to be heated or lit at times when only a few rooms are in use. Having a small number of large zones also limits flexibility if the usage or internal arrangement of the building is altered — frequent requirements in today’s commercial premises. In contrast, having many small control zones gives precise control and helps to ensure that energy is only used when and where it is needed. User interface A factor that is often given little attention when choosing a BMS is the user interface. No matter how potentially powerful and efficient the BMS is, it will never achieve its full potential unless the building’s occupants are comfortable using it. One method of providing this usability is the adoption of web technology. Occupants of the building may, for example, be given access to their own web page, which gives them control over their immediate environment. The BMS would, of course, be configured to limit the range of options to ensure compliance with regulations and company policies. A good BMS can, however, do much more than providing effective real-time control. It can also collect and analyse data about virtually every aspect of the building’s operation. This data can, for example, reveal areas of excessive energy consumption and changes in consumption that may be symptomatic of a problem. The building’s occupants can, of course, work with this data themselves, but an increasingly popular option is a remote monitoring service of the type provided by Siemens Building Technologies. Reports This service not only checks the data all day, every day, so that problems are quickly spotted, it also uses the data to provide customer-specific reports — highlighting areas where improvements can be made. In addition, the service can use the data it collects to produce the certificates of energy efficiency required by the new European Directive, and to keep them current. Further, by expertly analysing the data, the monitoring service can implement condition-based maintenance, ensuring that equipment is serviced only when it is needed, rather than routinely whether the work is needed or not. Similar analysis can also indicate when plant is nearing the end of its useful life. In this case, the data can be used to quantify the energy savings which would be possible with new equipment and accurately predict the payback period. With an energy partnership scheme, not only can these energy savings be guaranteed, they can also be used to finance the installation of new plant, greatly reducing the pressure on capital budgets. With ever-tighter legislation about energy usage, and with the energy ratings for buildings about to go on public display, there has never been a better time to invest in an effective building-management system. And, of course, it is worth bearing in mind that, as well as satisfying those legislative requirements, improving energy efficiency also means substantial reductions in fuel bills! Alan Ashmore is with Siemens Building Technologies, Hawthorne Road, Staines, Middx TW18 3AY.