Rising to the energy challenge Renewable electricity generation at the point of use — these wind turbines at Blackpool’s Solarium can generate up to 6 kW each. There are also 232 m2 of solar panels that can generate 18 kW of electricity.
A Government report that looks 30 to 40 years ahead surely ought to transcend politics. ‘The energy challenge’ identifies the right buttons. Time will tell if the will exists to press them.In a country where it is big news if the electricity supply fails for more than a couple of hours, gas is not available or petrol stations dry up, scant attention is given to where our energy supplies come from and whether we use more than we should. While we complain about the price of fuel, we complain even more if it is suddenly not so readily available. Someone, somewhere, has to be thinking about these concerns, and that thinking is now in the public domain as the culmination of the Government’s energy review published as ‘The energy challenge’. Government thinking is quite clear that the principle of supply increasing to meet demand cannot continue to apply to energy. That is why, as Alistair Darling, Secretary of State at the Department of Trade & Industry explains, that the proposals in the review are designed to reduce the demand for energy, secure a mix of clean, low-carbon energy sources and streamline the planning process for energy projects. A key issue is falling production of oil and gas from the North Sea increasing dependence on imports. In addition, up to a third of existing generating capacity for electricity will reach the end of its life over the next 20 years. ‘This is a critical moment to make informed choices to safeguard our quality of life for the forthcoming decades. These proposals will set out a framework in which the energy market will operate for the coming 30 to 40 years,’ says Mr Darling. ‘First,’ he says, ‘we must save energy. The new measures we are bringing forward will help us save energy in our homes, in business and in our public buildings, saving carbon and saving money. ‘In parallel, we are proposing measures to ensure that the energy we do use is secure and emits as little carbon as possible. The proportion of electricity generated from renewables needs to increase substantially, so we are strengthening and reforming the Renewables Obligation to push this forward to 20% — a five-fold increase on today’s level.’ In achieving its goal of reducing carbon-dioxide emissions by 60% by 2050, the report identifies two principal methods: increasing renewable-energy generation and saving energy. Initial progress towards saving energy is slow, with existing measures expected to reduce the UK’s carbon emissions by 7% by 2010 compared to 1990. Housing is one of the largest energy users, with the average home requiring four times as much energy to heat as the average new home. The scope for making a large dent in energy consumption is apparent from the fact that three-quarters of the carbon dioxide from homes is due to heating and hot water, and a fifth from lighting and appliances. 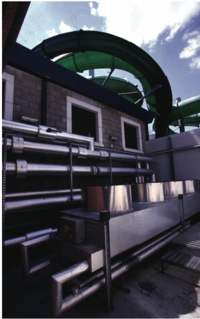 Decentralised electricity generation is seen as a key plank in future energy supplies. This is the fuel-cell installation at Woking.

Predictably, the report highlights building insulation and switching to energy-efficient light bulbs as measures that pay for themselves by reducing energy bills. However, new buildings are only part of the story. Nearly a third of the houses that will be standing in 2050 are yet to be built, so improving the existing stock is very important. Foundations are already in place for reducing the energy use of new housing, with changes to regulations since 2002 collectively improving energy efficiency by 40%. In the longer term, carbon-neutral development is the ideal, and the Government has announced its intention that the Government office estate will be carbon neutral by 2012. Another aspect of the report with implications for those involved in buildings and their services is the lengthy chapter on distributed energy. Generating electricity close to where it is used, rather than in large centralised power stations, is seen as increasing supply security and the efficiency of use of the primary fuel — reducing carbon emissions. Work by Woking Borough Council is highlighted as a demonstration of the potential of distributed energy. Cuts of 77% in carbon emissions have been achieved from energy-efficiency improvements in its own buildings. The profits have been reinvested in renewable-energy projects, installing 10% of the UK’s solar PV capacity and the UK’s only fuel cell by 2004. Woking also has a network of over 60 local generators, including CHP plant, to power, heat and cool municipal buildings and local housing. Many town-centre business are also connected to this supply. There is huge potential for much more distributed energy. Renewable electricity and CHP connected to the grid account for rather less than 10% of electricity generation. Off-grid generation is also less than 10% of our heat market. Technologies that bring energy generation down to community or household level represent just 1 to 2%. The issues to increasing distributed energy are generally not technical. Indeed, the Government recognises that uncertainty over the planning status of new equipment and the cost and time it takes to obtain planning permission are real barriers to the more rapid adoption of such technologies. The Government proposes that, as far as possible, such technologies are exempted from the need for specific planning through the General Permitted Developed Order. The Government and Ofgem will also lead a comprehensive review of the incentives and barriers that impact on distributed electricity generation — including CHP. This review will report in the first half of 2007. Many other issues are discussed in ‘The energy challenge’ — including transport and the provision of new centralised generating capacity for electricity, including nuclear — but the scope for the construction industry and the building-services sector to make a major contribution to tackling the issues raised is huge indeed.