Putting lightpipes to the test 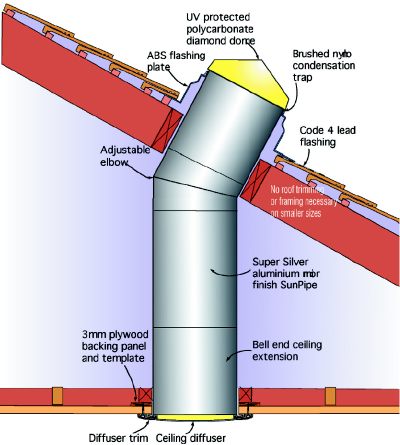 Lightpipes bring natural daylight into the heart of a building, with no heat loss or heat gain.

The future for lightpipes? So what of the future? The great challenge for the lightpipe industry is to produce 24 hour energy-free lighting by using small solar panels during the day to charge solar batteries to provide power to LEDs embedded into the surround of a lightpipe diffuser. As external light levels drop, the batteries will illuminate the LEDs. PIRSs will ativate the lighting only if there is movement below. The impact of such energy-free lighting will be enormous, not just for the UK but also for third-world and developed countries throughout the world. Monodraught is sponsoring research by Prof. Mike Wilson of London Metropolitan University to develop a system, and prototypes have been made. Much depends on the development of more powerful LEDs for success. All the technology is in place awaiting the development of more efficient LEDs. PV technology is already in used with Monodraught’s Sola-Vent, which uses a 600 x 300 mm roof-mounted solar panel to charge internal solar batteries that supply power to a 100 mm-diameter extract fan integrated with a SunPipe. A PIR in the bathroom triggers the fan whenever required With 99.6% reflectivity for lightpipes, architects and specifers are making greater use of the technology for bespoke systems. Typical applications are hexagonal and octagonal lightpipe systems for offices, reception areas etc., that can even be fitted with coloured glass or special-effect diffusers. 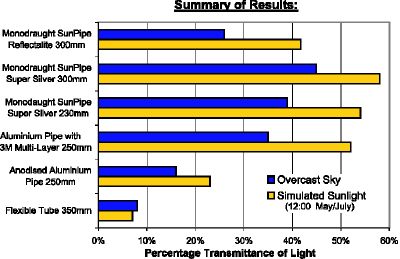 Tests have shown that the best lightpipes achieve over 50 transmittance with simulated sunlight and over 30% with an overcast sky.

The worldwide demand for reducing electricity from fossil fuels and a dramatic improvement in sustainable engineering is well served by lightpipes. With eight years’ experience in the UK, lightpipes have proved a dependable, predictable, energy-free system, with added health and environmental benefits. Lightpipes have come a long way and are here to stay. Terry Payne is managing director of Monodraught Ltd, Halifax House, Cressex Business Park, High Wycombe, Bucks HP12 3SE.