Except for small air-conditioning installations, heat rejection via cooling towers is more efficient, takes up less space and has an overall lower life-cycle cost than dry coolers. Energy savings of up to 30% are consistently possible.
Different Government departments have very different perspectives on the use of cooling towers for rejecting heat from air-conditioning systems. ROBERT MacLEOD-SMITH gives his perspective.The dichotomy surrounding cooling towers and evaporative condensers is that one arm of Government is encouraging their use whilst another is doing the opposite. A market study carried out on behalf of Baltimore Aircoil a few years ago concluded that there had been a marked swing to air-cooled alternatives because of the health-and-safety requirements of wet systems, the need for water treatment and a general concern by many users about the responsibilities of operating cooling towers or evaporative condensers. Major benefit This was despite the recognition by nearly all specifiers, contractors and owners that water-cooled systems using evaporative heat rejection equipment are more efficient, use less energy, take up less space and — except for small installations — have an overall lower life-cycle cost. At the time the Health and Safety Executive was tightening the regulations in response to public concern about high profile outbreaks of Legionnaires’ Disease caused by cooling towers. These are rare and always caused by poor maintenance and cleanliness where legionella bacteria have been allowed to proliferate in the recirculating water and escape into the atmosphere as an aerosol. Nevertheless, the authorities have set the safety of cooling towers as a high priority. Advocate In fact the HSC Approved Code of Practice and Guidance L8 ‘Legionnaires’ Disease — the control of legionella bacteria in water systems’ goes so far as to advocate consideration of the option of dry cooling ‘when cooling towers are due to be replaced or when new cooling systems are planned’. Times have changed, however. First, there is the very important national objective to reduce carbon emissions and combat climate change by more efficient use of energy. Secondly, the risk to public health from cooling towers has been significantly reduced through the measures taken by the HSE and the ongoing efforts of the Legionella Control Association, many professional bodies and the cooling-tower and water-treatment industries. Now there is a situation where the arm of Government responsible for reducing carbon emissions is actively promoting more energy efficient cooling systems in which wet cooling has a significant role to play. Inherent advantages Cooling towers and evaporative condensers using evaporative heat transfer have inherent advantages over dry cooling, which is a purely sensible heat transfer process. Their heat-rejection performance is dictated by the ambient wet-bulb temperature, and this is always lower than the dry-bulb temperature that governs the capacity of air-cooled alternatives. Since evaporative cooling can achieve a lower cold-water temperature or refrigeration system condensing temperature by at least the difference between the wet-bulb and dry-bulb temperatures, there are major energy reduction possibilities if the lower temperatures can be effectively utilised. For example, the energy consumption of a refrigeration compressor or chiller reduces by approximately 3% for every 1 K reduction in condensing temperature. With the wet-bulb temperature typically 6 to 12 K lower than the dry-bulb temperature, energy savings of up to 30% are consistently possible with water-cooled heat-rejection systems compared with dry coolers. In addition, the heat-transfer mechanism of evaporative cooling makes use of the latent heat of evaporation of water, which is fundamentally more effective than sensible-heat transfer. As a result, cooling towers and evaporative condensers will invariably be smaller, lighter and take up less space than equivalent air-cooled equipment. They also require much less air to achieve the same cooling capacity, so the air-moving system will always require fewer and lower-power fans, giving further energy savings. Strategy Two examples of how wet cooling systems are recognised as having energy efficiency benefits are included as part of the Government’s strategy to reduce carbon emissions to meet our Kyoto Protocol commitments. Part L of the Building Regulations has been revised this year to place great emphasis on minimising carbon emissions through energy-efficient and properly controlled building services — which includes the cooling system. The calculation methodology by which the predicted rate of carbon-dioxide emission from a building must not be greater than the stipulated target for that type of building includes factors which favour water-cooled systems — thus make it easier to achieve the target emissions rate. The revision to Part L of the Building Regulations is the UK’s response to meeting the EU Energy Performance of Buildings Directive (EPBD), which also came into force this year. The energy-efficiency benefits of evaporative condensers are recognised in the Enhanced Capital Allowance (ECA) scheme, which encourages businesses to invest in low-carbon technologies that save energy. Refrigeration equipment is one of the 16 categories in the ECA scheme where the use of energy-saving plant and machinery is rewarded with tax benefits. BAC. evaporative condensers are on the qualifying Energy Technology List, which means businesses can claim 100% capital allowance in the first year for their investment in a BAC evaporative-condenser installation, including directly associated items such as the water-treatment system. Conflict Overall, the energy usage of cooling systems is attracting special attention by Government, as the number of systems, especially for air conditioning in buildings, is forecast to rise in direct conflict with the national objective, which is to reduce carbon emissions. Wet cooling systems offer important energy-saving advantages to offset some of this increase and thus contribute to the national objective. 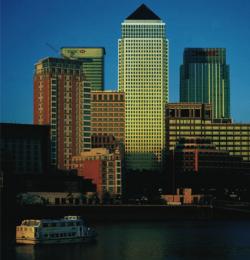 Cooling towers are widely used in the tall, air-conditioned buildings of London’s Canary Wharf. 121 cooling towers supplied by BAC serve 23 buildings with a total cooling capacity of over 300 MW.

Meanwhile, the cooling-tower and water-treatment industries continue their efforts to ensure that all cooling towers and evaporative-condenser installations are properly maintained with effective water treatment — which completely avoids the risk of their causing cases of Legionnaires’ Disease. What is needed now is for the health-and-safety authorities to remain vigilant to ensure owners and operators of cooling towers and evaporative condensers meet their responsibilities for managing the legionella risk and also to recognise that wet cooling systems have a key role to play in reducing carbon emissions. To discourage the use of wet cooling systems and advocate a switch away from them is not in the national interest. Robert Macleod Smith is with Balticare Ltd, Waters Meet, Willow Avenue, New Denham, Bucks UB9 4AF