Advancing the science of smoke ventilation

In even moderately tall buildings, measures to clear smoke in the event of a fire take up valuable floor space. A new approach by Colt considerably reduces that space requirement.People working in buildings with their feet more than 18 m above ground level cannot be rescued by firemen working from outside the building. Their ladders and hydraulic platforms cannot reach higher. If a fire should break out, a safe means of escape has to be provided inside the building, and that escape route also provides access for firemen to tackle the fire. Safe route In many such buildings, rooms open on to central, enclosed lobbies, with fire doors to the main staircase and emergency staircase. The principle of maintaining a safe access route is to prevent the build-up of smoke in those lobbies and stairwells. Since 2002, the most popular approved method has been a ‘BRE shaft’ running the full height of the building next to these lobbies. A 1.5 m2 damper at high level between this shaft and the lobby opens if there is a fire on the floor to allow smoke to be vented away by natural convection. The shaft is open at the top, and replacement air enters the building via a 1 m2 ventilator at the head of the stairs and the door at ground level when it is open. Such smoke ventilation is also required in buildings with floor areas per storey greater than 900 m2 and floors more than 7.5 m above the ground. They are also required in some types of basement. These BRE shafts are quite large, with an area of 3 m2 — which represents a lot of valuable space over several storeys in a commercial office building. That kind of space is worth a lot of money. That is why Colt, with many years’ experience of designing smoke control schemes, embarked on the development of a powered smoke-ventilation shaft with fans to draw smoke from the affected part of the building. The name of the product, Colt Shaft, mimics the name BRE shaft. CFD analysis and live tests confirm that the two approaches have a similar performance. The Colt Shaft, however, occupies only one fifth of the space required for a BRE shaft. The space requirement is 0.6 m2, a saving of 2.4 m2 per floor. That translates into hundreds of £s for a property company. Detailed analysis Attractive though such space savings are, they cannot be achieved if safety is in any way compromised. That is why, as Colt’s expert on smoke control Paul Compton explains, detailed CFD analysis and live tests were carried out to establish that the performance of Colt’s powered solution closely resembled that of the BRE mechanical system (Fig. 1). Paul Compton explains that simply installing two fans, one for duty and one for standby, at the top of a shaft does not produce a satisfactory system. A high-powered fun running at full speed would very quickly reduce the pressure in the lobby so much that it would be impossible to push open the door to reach the stairs — and safety. 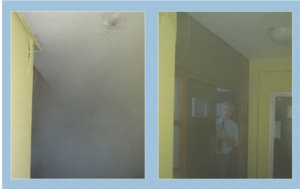 From this (left) to this (right) — the Colt Shaft smoke-ventilation system very quickly clears the build up of smoke from the lobby in Colt’s test rig, and Colt’s smoke-control expert Paul Compton comes to rescue your intrepid photographer!

For that reason, the speed of the fan needs to be controlled so that the pressure in the lobby is maintained at a lower, but similar, level to that in the stairwell — while still ensuring satisfactory smoke clearance. Not so very long ago the variable-speed drives that make such control possible would have been prohibitively expensive. Colt, however, uses a standard Siemens inverter drive controlled by the signal from a differential-pressure sensor to vary the speed of the fan in response to the opening and closing of doors from offices into the lobby and from the lobby to the staircase. The test rig at Colt’s facility in Havant provides a dramatic demonstration of the capabilities of the concept. When Paul Compton gives a demonstration, he first heats a small room off a lobby to about 40°C. The room, with its door closed, is then filled with smoke from a smoke generator to a visibility of less than 0.5 m. He then starts the smoke-extract system. Initially the fan runs at low speed so that the pressure in the lobby is kept at a similar level to that in the stairwell. With the door to the smoke-filled office open, the smoke is removed from the lobby to maintain clear visibility at low level. Even with the poorly sealed door to the stairs, the amount of smoke leakage is small. Colt recommends, however, that these doors should have smoke seals. If the door from the office to the lobby is open, natural air movement fills the lobby with smoke. Upon subsequent opening of the door from the lobby to the stairs, the fan quickly speeds up in an attempt to maintain a rough parity of pressure difference between lobby and stairwell, so that smoke is quickly cleared — in about 20 seconds — and the stairwell is kept totally clear of smoke. Importantly, the system continues to clear smoke effectively when firemen arrive to tackle the fire at its source. The demonstration facility has been used to explain the Colt Shaft to visitors such as fire officers, architects and building-control officers — leading to its approval and subsequent installation in various buildings across the UK. Not only has Colt emulated the performance of the BRE Shaft with a mechanical system, but the Colt Shaft is also hardly affected by external wind pressure, with the result that it performs better than the BRE Shaft under adverse conditions.