A new approach to adding ‘thermal mass’ to buildings Installed in a test project in France, DuPont’s Energain lightweight ‘thermal mass’ reduced peak temperatures by up to 7 K compared with an identical untreated space.
A new approach to increasing the thermal inertia of buildings, which can also be retro-fitted, has been developed and tested by DuPont.When we described the prototype of a lightweight panel which mimics the thermal mass of 10 cm of concrete in the July 2006 issue of Modern Building Services, quite a lot of readers were keen to learn more. The panel was shown on the stand of DuPont at Interbuild and received a commendation in the show’s awards for innovation. The concept has now been developed into a commercial product, Energain,* and has undergone independent tests by EDF in France for its capabilities in reducing high internal temperatures in buildings. Phase change So how does a material that is only 5 mm thick and weighing 4.5 kg/m2 have such a high ‘thermal mass’. There are two reasons. The key one is that the material encapsulated in the panels undergoes a phase change to absorb heat at about 22°C as the temperature rises and at about 18°C as the temperature falls to release heat back into the building. The total heat-storage capacity of Energain is 170 kJ/kg for a temperature change from 14 to 30°C, of which 40% is due to the change of phase. Large areas of Energain can readily be installed in buildings, both new and old, by fixing panels to large surfaces such as walls. No special fixing techniques are needed. Dr Loïc Rolland, technical programs manager with DuPont Packaging & Industrial Polymers, explains the reason for the phase change at 22°C. ‘Research undertake by the architectural and building professions suggests that the most comfortable temperature in a room is 22°C, and so the copolymer was designed with melt point of 22°C. The material was designed to absorb heat at that temperature and then begin releasing it again at 18°C. This stabilisation effect can bring real comfort, especially in countries where air conditioning is not so widely used, plus the savings on energy are significant.’ In reasonably quantitative terms, the effect of Energain is to reduce peak temperatures by 7 K and also to achieve a minimum temperature 7 K higher than it would otherwise be. The benefits are said to include a reduction in air-conditioning costs of up to 35% and lower heating costs — with associated reduction in carbon-dioxide emissions. Evaluation The thermal performance of Energain has been analysed using a French program CoDyBa and also in an experimental installation by EDF (Electricitè de France). Two attic spaces in an old building were the subject of the trials. Both spaces have an identical structural set-up. Once was lined with Energain panels fixed behind the plasterboards, in the walls and in the ceiling. A third room between the two test rooms acts as a buffer zone. The two test rooms have identical multiple temperature sensors. The initial six weeks of the trial included August 2006, which saw only medium solar radiation. Detailed analysis of temperatures in the two rooms demonstrate that Energain considerably reduced the temperature swings — with peak temperatures reduced by over 6 K. The test room has a volume of 88 m3, and calculated energy savings for a ∆T of 6 K is nearly 10 kWh a day. The results obtained using CoDyBa are said to agree well with the measured results. 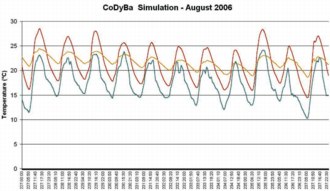 The yellow line shows how DuPont’s Energain ‘thermal mass’ held down the internal temperature in a test house compared with an untreated space in the same test house (red line). The blue line is the outdoor temperature.

Technically, Energain is made from paraffin encapsulated in DuPont copolymer in the ratio 60:40 and laminated on either side with a high-quality aluminium sheet. The edges are finished with aluminium tap. A special aluminium tape is required to seal joins between panels and repair any abrasions. The aluminium sheet and tape act in a safety capacity as a barrier against fire. Additional cooling The role of Energain is to support mechanical ventilation, and 5 m2 of Energain can provide 1 kWh of additional cooling each day. Even if it is still not possible to avoid internal temperatures in offices exceeding 25°C for more than 5% of the occupied period or 28°C for more than 1% of the occupied period, as recommended in CIBSE guidelines, the amount of air conditioning required to be installed and its operating time will be much reduced.
For more information on this story, click here:Jan 07, 69