Vapour-compression technology to the rescue

Air conditioning aNd the refrigerants it uses frequently get a bad Press. But Mitsubishi’s Donald Daw believes that air-conditioning technology holds the key to reducing the UK’s emission of carbon dioxide.If you accept that the world is getting warmer and will continue to get warmer, there are important implications for the air-conditioning industry — and the vapour-compression technology that is almost universally used. Donald Daw, director of commercial air-conditioning division of Mitsubishi Electric in the UK, has been looking at the various facts and opinions as part of the company’s development of a strategy for sustainable heating and cooling. The first fact that he draws attention to is that 11 of the last 12 years (1995 to 2006) rank among the 12 warmest years for global surface temperatures since 1850 — according to a United Nations publication ‘Climate change 2007: the physical science basis’. Looking ahead, Donald Daw says, ‘The report deemed it “virtually certain” that there would be “warmer and more frequent hot days and nights over most land areas”.’ The belief expressed in the UN report is that the growth of carbon dioxide in all area has to be limited and controlled. As Donald Daw points out, reducing carbon-dioxide emissions must mean reducing the energy used in homes and offices for heating, lighting, cooling etc. — which accounts for 40% of Europe’s energy consumption. Concern about carbon emissions is now rubbing off onto the public in the UK. Donald Daw refers to a recent UK national survey for the Carbon Trust that showed that 66% of those questioned wanted to know the carbon footprint of products they buy and that 74% are more likely to buy a product with a low carbon footprint. Against that background, Mitsubishi is considering how it could grow its business in a sustainable and responsible manner, asking the question, ‘Should our industry’s growth continue in its current direction — unchecked.’ Building a vision In building a vision for sustainable heating and cooling, Mitsubishi has looked carefully at the growth of commercial air conditioning in the UK since 1994 and forecasts forward to 2016. The company has also looked at how heat-pump technology could substantially reduce carbon-dioxide emissions from homes. ‘We know that air conditioning is a fact of life in the modern world and that the commercial sector will continue to grow, but we know that the industry can deliver improved sustainable technology to meet the heating and cooling needs of the country.’ He is also concerned that if a market for domestic air conditioning takes off, carbon emissions would increase. ‘We need to remove our industry’s obsession with domestic air conditioning and act responsibly by looking at what is actually needed rather than simply trying to drive up sales.’ Commercial air conditioning But first a look at the commercial air conditioning market. Since 1994 sales of split systems have virtually quadrupled to stand at just over 200 000 units a year in 2006. Sales are expected to nearly double again by 2016 and reach 400 000 units a year. Significantly, the sales of cooling-only systems are declining and are expected to vanish within a couple of years. (Fig. 1) 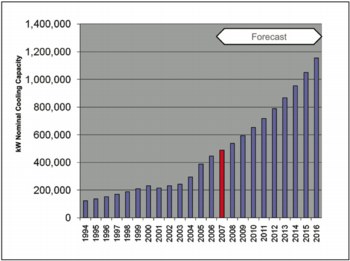 — Fig. 2: There would appear to be no stopping the growth in sales of VRF air conditioning in the UK.

Sales of VRF systems are growing even faster and expected to grow by nearly 10% a year up to 2016. Systems delivering about 500 000 kW of cooling are expected to be installed this year, growing to reach nearly 1 200 000 kW of cooling by 2016. (Fig. 2) Mitsubishi Electric estimates that split and VRF air-conditioning systems in the UK were responsible for just over 1.6 Mt of carbon dioxide in 2006 (Fig. 3). With current growth rates and equipment being replaced on a 12-year cycle, carbon-dioxide emissions will grow by 50% by 2016. 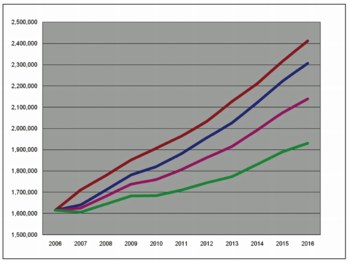 — Fig. 3: With the growth in the sales of both split and VRF air conditioning in the UK comes a rapid growth in carbon-dioxide emissions from 1.6 Mt in 2006 to over 2.4 Mt in 2016 (top line), assuming a 12-year replacement cycle. The rate of growth can be slowed down substantially by reducing the replacement cycle to 10 years (blue line), improving maintenance (pink line) and exploiting free cooling and heat recovery (green line).

As Fig. 3 shows, there several courses of action that can be taken to reduce the growth of carbon-dioxide emissions. One is to exploit the steadily growing efficiency of new equipment by shortening the replacement cycle from 12 years to 10. That would reduce emissions in 2016 by 106 000 t — 4.4%. Maintenance also has a key role to play, and Donald Daw suggests that improved maintenance could reduce annual emissions by a further 167 000 t. The cumulative effective of earlier replacement and better maintenance is 11.3%. Another measure is to fully exploit free cooling and heat recovery to reduce 2016 emissions by a further 209 000 t. The cumulative effect of all three measures is 20%. Despite the commercial air-conditioning market more than doubling, the increase in carbon-dioxide emissions could be restricted to about 20%. Those three measures together would result in carbon-dioxide emissions in 2016 being reduced by 482 000 t. Offsetting that level of emissions would, according to Donald Daw, require the combined efforts of 44 million trees. Alternatively, that saving would offset emissions from 134 000 average family cars. While every saving counts, the fact is that cooling in office buildings in the UK represents only about 0.2% of carbon-dioxide emissions from buildings. Emissions from housing That is why Mitsubishi Electric has been looking at emissions from housing in the UK, which is responsible for over 145 Mt of carbon dioxide a year — 90 times current emissions from commercial air-conditioning. There is also a huge potential market, with there being 26 million households in the UK. Just over 180 000 new homes were built last year, and the Government target is for a future building programme of 200 000 a year. At least 75% of UK properties existing today are still expected to be in use by 2050 — the year by which the Government has targeted carbon emissions to be reduced by 60% from 1990 levels. Donald Daw reminds us that housing is responsible for 27% of UK carbon emissions and that an average 3-bedroom home produces around 3.6 t a year. Of domestic energy usage, 60% is due to space heating and 24% to hot water. Heat pumps could deliver both services, hence Mitsubishi’s interest. According to the Government, measures to improve existing stock could save 25.5 Mt of carbon dioxide a year. That leaves a further 110 Mt to be achieved by 2050 to counter emissions from the new homes needed to accommodate predicted population growth. Heat-pump technology The first observation made by Donald Daw is that using heat-pump technology, a house can be heating and cooled and still emit less carbon dioxide than if it were heated using gas. If gas-fire space heating is responsible for 442 kg of carbon dioxide a year, emissions using a heat pump would be just 253 kg — 42% less. Adding cooling into the equation brings in another 72 kg of carbon dioxide, taking the total to 325 kg — which is still 26% less than gas-fire heating. Those figures could be regarded as very positive for the development of a domestic air-conditioning market in the UK — but Donald Daw is not convinced. He asks three questions. ‘Is there a necessity for cooling in the market?’ ‘Does the temperature increase attributed to global warming equate to an excuse for triggering domestic cooling?’ ‘Will the UK Government allow domestic cooling products to be sold in volume?’ His attitude is directed by emerging research data indicating that the cooling requirement of most UK homes can be met with ventilation and free cooling. He also points out that Mitsubishi’s own research suggests that night-time comfort can be effectively achieved using only ventilation — and that recent academic research supports this conclusion. To clarify what the cooling requirements really are, Mitsubishi Electric is modelling homes with two to five bedrooms. Big opportunity The big opportunity that Donald Daw sees is for heat pumps to provide space heating and hot water in homes, pointing out that a heat pump with a COP of 4.5 has 57% low carbon emissions compared with a gas boiler. 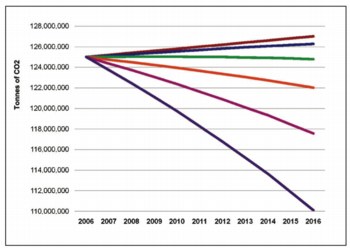 — Fig. 4: Carbon-dioxide emissions from gas-fired boilers in UK homes amounted to 125 Mt in 2006 — and will grow unless something radical is done.
The red line (top) predicts the growth if boilers continue to be used in new homes and to replace existing boilers.
The blue line assumes heat pumps replace boilers in all new homes.
The green line shows the effect of heat pumps in all new homes and as a substitute for 10% of boilers in existing homes as they become due for replacement.
The orange line is 20% replacement with heat pumps, the pink line is 50% replacement, and the bottom line shows the effect of all gas boilers being replaced with heat pumps.

He then moves on to consider heat pumps being substituted for gas boilers. Starting in 2006 with carbon-dioxide emissions due to gas boilers of about 125 Mt, he predicts that if boilers are used in new build and replacement in existing houses, emissions would rise to 127 Mt by 2016 (top line in Fig. 4). Using heat pumps instead of gas boilers in new homes would slightly reduce the increase — a reflection of just how slowly the building stock is being replaced (blue line). It is when heat pumps are used to replace 10% of gas boilers in existing dwellings that emissions start to fall (green line). If heat pumps replace gas boilers in 20% of the replacement market, carbon-dioxide emissions would fall to 122 Mt by 2016 — 2.4% down on 2006 (orange line). To get even more serious with a 50% replacement market would see emissions fall to 118 Mt (pink line). Finally, if all existing boilers are replaced with heat pumps, emissions would fall to 110 Mt (bottom line). The 114 Mt fall in emissions compared with 2006 more than adequately meets the 110 Mt Government target by 2050 to meet the Government target — 34 years early. At present, some 1.6 million domestic gas boilers are sold in the UK each year, compared to just over 200 000 units in the split air conditioning market. Donald Daw concludes, ‘It is time to start reviewing fundamental and engrained thinking about what is health for the industry’s future and develop new approaches. Obsession ‘We need to start removing our industry’s obsession with domestic air conditioning and act responsibly by looking at what is needed rather than simply trying to drive up sales. ‘Space heating and hot water account for over 80% of each household’s carbon-dioxide output, and this is where I believe the industry should focus and develop advanced heat-pump technology that can challenge the 1.6 million domestic gas boilers that are sold in the UK each year. ‘It sounds a little extreme, but if every UK gas-boiler sale was replaced by a heat-pump boiler, we could reduce emissions by 16 888 000 t of carbon dioxide by 2016.’* [* This figure is based on what emissions would be if gas-fired continued to be used for both new build and replacement — Ed.]