There are few finer things in life than designing and building the future — CIBSE president Donald Leeper.
Addressing the issue of growing carbon-dioxide concentrations in the atmosphere is a key driver in the future design of buildings, and was a principal focus at last month’s CIBSE conference ‘Engineering the future’.*Two dominant themes in ‘Engineering for the future’, the theme of last month’s [March 2006] CIBSE National Conference, were the new Building Regulations and reducing carbon emissions for buildings as part of delivering the Government’s objective of reducing UK carbon emissions by 60% by 2050 compared with the year 1990. CIBSE president Donald Leeper stressed that 40% of UK carbon emissions are from buildings and that nearly half are from commercial buildings — 17% of total emissions. In reducing carbon emissions from buildings, Donald Leeper identified four key approaches. • Conserve energy by using less of it by implementing energy-efficiency measures. • Exploit renewable sustainable resources. • Exploit non-sustainable resources such as nuclear electricity generation. • Use low-carbon technologies such as CHP. 2050 — 40 years early Far from taking until 2050 for Barnsley Metropolitan Borough Council to reduce its carbon emissions by 60% compared with 1990, Dick Bradford, the council’s principal designer for building services and energy engineer, expects to achieve that target by 2010. The first step was taken in 1986 when the council adopted a policy of energy efficiency and conservation. The target was to reduce energy consumption by 15% in five years. In reality, 20% was achieved in five years. Techniques used included building- and energy-management systems, controls, radiant heating instead of convective and heat exchangers in ventilation systems. Resetting the reference year to 1990, Barnsley MBC achieved the desired 20% reduction in energy consumption during 2001, nine years earlier than the 2010 set by the Government, and the 40% target during 2005, 15 years ahead of the 2020 Government timetable. The key to the 60% target for 2050, which Barnsley MBC aims to achieve by 2010, is the growing use of biomass technology. Burning material such as locally sourced wood chips and pellets is carbon neutral. Dick Bradford explained that there is plenty of such fuel available locally. There is, for example, over 13 500 ha of woodland in South Yorkshire capable of producing well over 60 000 t of timber a year. The South Yorkshire Forest Partnership has identified up to 11 suppliers of wood chip with a supply potential of 45 000 t a year. Wood is also cheaper than coal or gas. Knowing that fuel supplies were plentiful, it was in June 2004 that Barnsley MBC became the first local authority in the country to adopt a biomass fuel heating policy. In new buildings and major refurbishment projects, boilers designed to burn wood chips have been installed. Existing solid-fuel boilers have been examined for their potential to be converted to wood pellets. A sample project is the 7-storey Britannia House residential block. It has 166 flats and was previously served by two coal-fired boiler houses. The new plant comprises a 320 kW and 150 kW wood-burning boilers and a standby gas-fired boiler plant. The project includes a thermal storage vessel so that the biomass boiler can undergo a controlled shut down. Other schemes planned include the council’s new headquarters, with wood-chip boilers providing 850 kW of heating. At Smithies Lane Depot, oil-fired boilers are being replaced with a 500 kW wood-chip boiler with oil-fired backup — there being no gas to the site. Coal-fired boilers in a secondary school were initially trialled to burn wood pellets and proved to be totally successful in doing so. Looking to the long term, Dick Bradford explains, ‘The council still consumes in excess of 6500 t of solid fuel in a year in 133 coal-fired boilers on 66 sites. If all that coal was converted to carbon-neutral wood fuel, the council would reduce omissions by a further 15 500 t — thus exceeding the 2050 target. This means that BMBC will have reduced its carbon-dioxide emissions by 66% from 1990 levels, or 76% from the 1986 levels.’ Radical energy efficiency Reducing carbon emissions from buildings by the 25 to 30% required by the new Building Regulations does not even approach the radical improvements in energy efficiency that Dr Amory Lovins, chief executive of the Rocky Mountain Institute (RMI) in the USA wants to see becoming more widespread. He reckons that achieving small reductions in carbon emissions costs more than aiming for big savings. 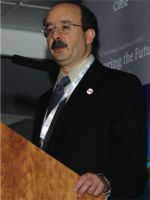 As an illustration, he referred to the RMI headquarters at Snowmass in Colorado, which integrates dwelling, farm and workplace under one roof. This building incorporates so much thermal insulation that it does need boiler plant to provide space heating. It also maximises solar heating. Amory Lovins argues that the level of insulation should not be determined by its cost effectiveness at reducing heating bills. He explains that adding insulation to reduce heat loss gives reducing returns until you break through the ‘tunnel’ cost barrier and eliminate the capital cost of a heating system. Dr Lovins summarises his philosophy as ‘advanced design integration for radical energy efficiency’. Integrated whole-building design, he believes, can yield superior comfort with anything from three to 30 times less energy consumption and, often, lower capital costs. The type of super-glazing available in the USA for example admits six times more daylight than conventional windows and reduces cooling loads by a factor of four. Not only does that reduce the energy required for air conditioning, but it also enables mechanical plant to be reduced in size or eliminated. Zero carbon emissions Showing the way to achieving zero net carbon emissions when averaged out over a whole year of operation is a new classroom at Chulmleigh Community College in Devon. John Crabb of the Centre for Energy & the Environment at the University of Exeter, which provided design and energy consultancy, explains that zero net carbon emissions cannot be achieved just by good low-energy design and that residual energy demand has to be met from a non-carbon source. The architect of ‘classroom of the future’ was Devon Property. John Crabb explains that this project is a demonstration of what can be achieved with current technology if cost is not a constraint. 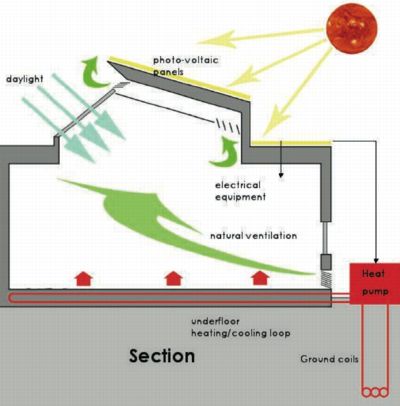 The energy strategy is based on good low-energy design and producing electricity on-site from photo-voltaic cells. Other aspects of the design were decided solely on their ability to achieve low energy performance and to provide optimal scope for using electricity from the panels. An array with a peak capacity of 20 kW was installed with Government grant aid. Low-energy design demands maximising the use of all free energy flows such as body heat from students, incidental gains from equipment and from daylight. Direct solar gain was rejected because it is not needed in a well insulated, densely occupied space such as a classroom and because its magnitude and fluctuations are very difficult to manage. To avoid solar gain, the main glazing faces North using an innovative roof structure. This approach makes possible high levels of daylighting and an effective system of natural ventilation. Ground-source heat pumps provide space heating. They use the renewable electricity and serve an underfloor heating system, the low flow temperature of which enables the COP to be maximised. Comfortable classroom temperatures in winter are achieved by controlling the concrete slab at a constant 19°C. When other sources of heat such as people increase the room temperature above the slab temperature, the slab is no longer a heat source. Natural ventilation is achieved by providing air pathways in the structure. Inlets are at low level, with a high-level exit grille at the top of the roof structure, and passive ventilation is expected to be achieved by buoyancy-driven airflow. Motorised louvres at high and low level are controlled by a carbon-dioxide sensor in winter and temperature in the summer. If the airflow is insufficient to maintain the control set point, fans in the ceiling channels are switched on in stages. Much greater airflows can be achieved by manually opening high- and low-level windows. Computer modelling predicted that the PV array could produce 17 000 kWh a year. The likely electrical consumption was predicted to be 4800 kWh, of which only 1000 kWh would be needed to run the heat pumps. Although there is sometimes a need to use mains electricity in the winter to meet underproduction, over a year as a whole the classroom can be run on renewable energy, so that net carbon emissions for a year are zero. Extensive monitoring is being carried out to reveal the energy balance in practice. Refurbishment Exciting though the possibilities are of achieving zero or near-zero carbon emissions from existing buildings, it is the refurbishment of existing buildings that is crucial to the Government’s 2050 target. As Steve Irving, director for building research with FaberMaunsell, explained, the turnover of the building stock is so low that new buildings with even a very low carbon footprint will make an insignificant dent on overall carbon emissions. That is why major refurbishments of buildings over 1000 m2 come within the scope of the new Building Regulations. In reducing carbon footprint, he identified four variables: • Building fabric • Plant • Controls • Low- and zero-carbon technology. Where there may be limited scope for improving the building fabric, efficient plant and efficient control assume prominence. However, Steve Irving points out that where the refurbishment involves 25% or more of the surface area of the fabric, the new Building Regulations require the whole surface to be upgraded — for what will in reality be a very small marginal cost. The new Building Regulations, especially Part L covering fuel conservation, provide the opportunity for building-services engineers to apply their expertise to reducing the carbon footprint of buildings. Steve Irving summarises, ‘Part L will not succeed without champions. Will you be a champion? Comply with Part L. Don’t seek to avoid it. Try to exceed it if you can.’ And the personal rewards were summarised by Donald Leeper: ‘There are few finer things in life than designing and building the future.’ *All the presentations made at the 2006 CIBSE national conference are being made available as a webcast on the CIBSE web site.